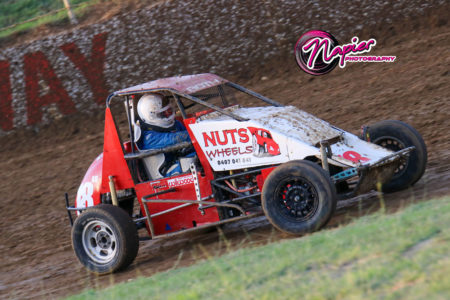 This Saturday evening from 5pm at Bairnsdale Speedway, three prestigious events headline the show with a line-up that includes over seventy-five race drivers including two current Victorian champions Jock Baker in Limited Sportsman and Shannon Meakins in SDAV Hot Rods. The King of the Rock for Limited Sportsman heads the programme, an event more than thirty years old along with the SDAV Hot Rods Legends Cup and the Wingless Sprints annual 50 Lapper.

Local Bairnsdale Limited Sportsman competitors have worked behind the scenes to ensure a strong field in the King of the Rock. Prizes on offer on the night for the racers and inducements for travel and prize money nave resulted in some of the best from the west heading east to compete. Jock Baker from Horsham and Andrew Wilson from the Hamilton Club lead Troy Curren and Katelyn Worthy across the state into battle against the local Bairnsdale racers including Mark Noonan who steps in from Sprintcar racing duties, Trent Wilson, David Dennison another Sprintcar racing stepping into the Sportsman, Mark Both, Matthew Hurley, Chris Woetjes and Tim McKenzie.

The Legends Cup for SDAV Hot Rods honours the class champions and super volunteers right throughout the class history. Winning the race brings great satisfaction to those that seal the deal. Victorian Champion Shannon Meakins, former champion Stan Marco Snr and Phil Jenkins and Dean West also former state champions give the line-up class. The 350ci engines are a fan favourite in bodies that represent a modified Ford 34’. These machines will sing loud through the valley.

Wingless Sprints action could almost be a New South Wales vs Victoria grudge match with the number of visitors from north of the border nominated. Several class names are nominated from both sides of the border and Graham Keats, Mark Blyton, Andrew Seery, Peter Granger and Andrew Smith to name a few. These New South Welshmen and their Lady racers will be up against the likes of Daryl Logue, Matt Mills, Wayne Logue, Samantha Millar, Todd Hobson, Chris Temby, and Peter Logue all stars of the class in Victoria. Fifty laps is a long way, A lot of stamina required to get to the end and a finish is a terrific achievement, a win however, is something to be super proud of the rest of your career.

There will also be two mini features for the local Standard Saloon class with the Men’s Standard Saloon field including some extremely fast cars up against local competition. Last start winner Andrew Cormack will be deep into the accelerator this weekend to hold out the likes of Jacob Vuillermin, Shane Stewart, Bradley Hill, Rhys Lansdown and of course Bairnsdale’s club champion Josh Thomas.

The Ladies Standard Saloons have attracted a small local field.

To tick all the governmental requirements and get this event off the ground the Bairnsdale Speedway Association ask that patrons follow the protocols in place such as bring a Mobile Phone so you can scan a QR code and sign in your carload as attending. Citizens with any of the Covid Symptoms are asked to stay home. Everybody is asked to bring a mask and wear it when social distancing cannot be maintained, that includes interacting with others in the crowd or queuing at the Canteen. We ask that you limit your movement around the venue once seated in a viewing spot to mitigate any potential risk. Replacement masks will be available on sale at the Speedway.

Gates will open to the public from 1pm with racing from 5.30pm. Tickets from the entry gate in cash only, no card facility available. Adult entry is $20 a head whilst aged pensioners only is at $15. Children aged between 12 and 16 enter at $8 each and all children under the age of 12 enter free.