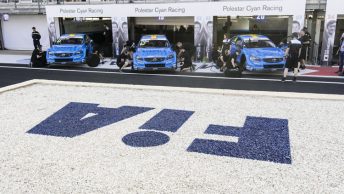 The pressure is on Polestar Cyan Racing ahead of the second FIA World Touring Car Championship (WTCC) round at the legendary Monza circuit in Italy this weekend, following a strong season opener in Morocco three weeks ago.

“Monza is the very opposite to the tight track in Morocco and should suit us a lot better with its high-speed layout. If Morocco was an away game where we escaped with a draw, Monza is the return home game; we must succeed it if we are to become World Champions. The pressure is on us now,” said Alexander Murdzevski Schedvin, Head of Motorsport at Polestar.

The season opener in Marrakech saw Polestar Cyan Racing sending a clear message of strength to its main competitors by claiming a MAC3 victory, two podium finishes and a joint manufacturers’ championship lead with Honda, despite the circuit being one of the toughest of the calendar for the team.

“We started the season on the level needed for a title assault. We won the MAC3 and got a bit of winner’s feeling in the team – that is important for everyone. We need to be ahead of Honda at Monza and let’s not forget the Citroëns. They are really strong here as well. This track should suit us better than Marrakech and Hungaroring for example and we need to deliver where we are strong. My dream scenario this weekend is a 1-2-3 in the main race,” said Thed Björk.

Nicky Catsburg made a strong debut for the team, claiming the most points of the drivers in the team and is currently placed third in the drivers’ championship, 15 points from championship leader Tiago Monteiro.

“I kept my expectations quite low ahead of the season but knew that if we could do well in Marrakech, we can do well everywhere. And I was so pleased with the results after the season opener. Now I have quite high expectations for Monza. You have to change your mindset now that you know that we have a car with the potential to claim the World Title. I think we can fight for victories at Monza and that is the plan,” said Nicky Catsburg.

The super-fast Monza circuit was constructed in 1922 as the third purpose-built racing circuit in the world, with legendary drivers like Juan Manuel Fangio, Ronnie Peterson and Ayrton Senna claiming victories there, as well as the inaugural WTCC race being held at the circuit in 1987.

“It is an honor for me to race at Monza, a circuit with so much history and it’s definitely one of the best in the world. It is also an unforgiving track as you have 74% full throttle around a lap, so a small mistake costs a lot of lost time. My goal for the weekend is to be in the top three of qualifying and fight for the victory in race one and two,” said Néstor Girolami.

Follow the team during the Monza weekend with live timing, live commentary and more on our new WTCC site: http://wtcc.polestar.com