Preparation the key for Jacob Douglas heading to Pukekohe

Preparation the key for Jacob Douglas heading to Pukekohe 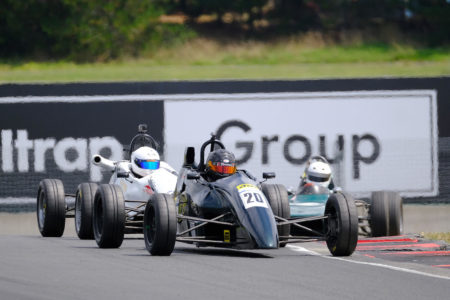 The 2021 New Zealand Formula Ford Championship gets back in action for round two this Sunday at Pukekohe Park Raceway, Auckland. Heading north, to yet another new circuit, is Christchurch teenager Jacob Douglas. It’s the kartsport champion’s first season in single seaters and exposure to circuit racing.

“I expect that it will be similar to the first round at Hampton Downs (Motorsport Park),” commented Douglas. “Again, it is not knowing the track and having just two practice sessions leading into qualifying, will be the challenge.

“It was good to get the first round under our belt. We now know where we are on the grid and can set goals for each race and the weekend. I suspect that it could be more even with most of the field having less experience at Pukekohe”

At the opening round at Hampton Downs, Douglas finished three times in the top ten gaining experience and confidence from a national level race meeting.

Preparation has been the key for the high school student with focus on practicing on his simulator, watching video footage of the track and talking with experienced drivers on what to look for and expect at Pukekohe.

“It’s more than just a couple of corners. It sounds like it is pretty bumpy and takes a lot of guts to do a quick lap. I’m up for the challenge and know that I will do the best I can.”