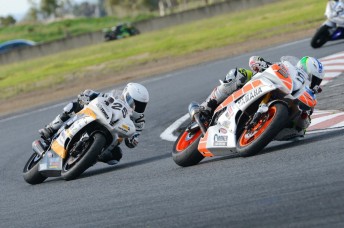 Wamuran rider Aiden Wagner is in final preparations ahead of his home round of the Swann Insurance Australasian Superbike Championship this weekend at Queensland Raceway.

Wagner will be looking to build upon his pace from recent testing to help secure a podium finish and gain critical Championship points.

In the lead up to this weekend’s events, Aiden has taken the opportunity to participate in a range of motocross events in Sydney, thus increasing his level of race preparation on two wheels.

With another large field featuring the best young riders in Australia, Wagner admits it will be a close battle at the front.

“I’ve put a lot of focus into my physical training before this weekend and the chance to get in some motocross in Sydney has certainly been helpful. I feel that it will definitely improve my race fitness races which will be critical to staying up the front and challenging for the lead,” Wagner said.

With a heavy workload across the three day event, Aiden is now turning his attention to his personal mental preparation for the weekend’s racing, knowing that the competitiveness will be at its peak as the season hits its halfway point and the emphasis on Championship points increases.

“I’ll be looking to relax a bit in the few days before we hit the track and emphasise my preparation on my mental fitness. Having six races across the weekend is very demanding so I need to be as best prepared as I possibly can, it will definitely be a tough encounter,” Wagner added.

Another healthy Supersport field is sure to challenge Aiden throughout the weekend’s races and the 20-year-old is well aware that he must be performing at his peak from the beginning of Friday practice.

With the Willowbank circuit being his main testing venue, Wagner’s experience there is sure to help him against his high profile opposition.

“I’m really looking forward to the weekend at Queensland Raceway, it’s a track I’ve ridden on numerous occasions so I think that should put is in a good position for a big result.

There will be plenty of competition in the Supersport class so I’ll have to be on my game right from the beginning and work on ensuring I’m at the front in qualifying to set up a good run in Saturday and Sunday’s races,” Wagner concluded.

Round three of the 2014 Swann Insurance Australasian Superbike Championship will take place at Queensland Raceway, Ipswich, Queensland from June 27-29.