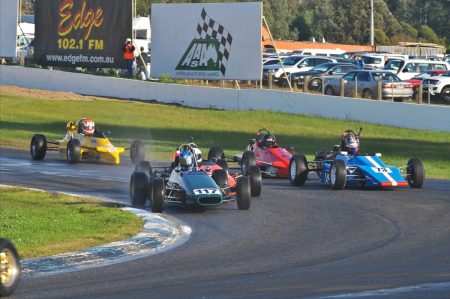 A field of 23 Historic Formula Fords will be racing at Winton Motor Raceway on May 17-19 for the annual Historic Winton event promoted by the Austin 7 Car Club.

Historic representatives within the Formula Ford Association Inc. started discussions last year with the organising committee to re-introduce Historic Formula Ford cars to one of the biggest historic race meetings in the country, Historic Winton, held on the iconic “short track” configuration.

A grid of 20+ Historic Formula Fords participated in the event last year, with entries open only to cars in the Fa and Fb classes. Last year’s immediate success resulted in a return this year to celebrate the category’s 50th anniversary in Australia.

23 cars have entered for the event this year, with entries open to pre-1984 cars (Fa and Fb classes).

Many competitors will embark on the interstate journey to Winton, including newcomer Nick Mansell from NSW and Kendel Barry-Cotter from Queensland.

Among the 23 cars entered, some have particularly interesting stories to tell. Returning to the track is the Spender Lynx driven by Cole Spender and built by his father in 1971.

“The Spender Lynx was built by my father (Phil Spender) in New Zealand in 1971 to contest the New Zealand Formula Ford Championship, built from the remnants of a mostly destroyed Brabham, and the few surviving parts of Brian Falloon’s RorstonPorsche with the rest fabricated himself in his parents garage”, revealed Cole Spender.

Another car worth a mention is Laurie Bennett’s Elfin 600, that will once again be driven by his son Nick. This is one of the very few historic cars in existence with just one registered owner in the logbook. Laurie bought the car new in 1971 and has held on to it ever since.

The weekend will also see 1983 Formula Ford Driver to Europe Series winner Bruce Connolly back behind the wheel of a Formula Ford. Connolly will be driving Chris Davison’s Reynard, joining Claire and Johnny Greig in the revamped Ecurie Australie team.

“I really enjoyed my FF racing days, and after watching the historic FF races at Phillip Island in 2018 and 2019, it sure captured my attention again. So when my old friend Chris Davo (Chris Davison) offered me a drive in his FF84 Reynard, to help celebrate the 50th anniversary of FF in Australia, I jumped at the chance. I really enjoyed racing with Chris, as we also enjoyed a lot [of] fun and laughs along the way, so it will be especially enjoyable to be racing with Claire (Greig) and Johnny (Greig),” said Connelly when his drive for Historic Winton was confirmed.

Ironically, Connelly will be racing alongside his championship-winning car – the Galloway HG5 which is now owned and driven by Phil Marrinon.

At the end of the weekend, a range of trophies and prizes will be awarded:

TAA Trophy: for the winners of each class, in honour of the TAA Formula Ford Driver To Europe Series that ran in Australia from 1972 to 1982. See more details here.
Peter Larner Cup: awarded to an individual that displays the best spirit, performance, sportsmanship, tenacity, determination or any combination of the above. This is awarded by Peter and Jamie Larner.
A Varley Red Top 25 Racing Battery: awarded to the best-presented car in the grid.

The weekend will start with the typical practice day on Friday, followed by qualifying and three races across Saturday and Sunday.

A category barbecue will also be organised by a range of volunteers on behalf of the Formula Ford Association. The friendly BBQ will take place after race one on Saturday.

Tickets for the event can be purchased online at a discounted rate, or at the gates at Winton Motor Raceway. To purchase your ticket online or to find more information, click on this link.