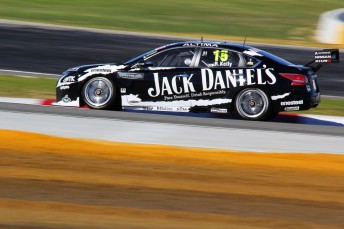 The Jack Daniel’s Racing Nissan Altimas of Rick and Todd Kelly had a learning practice day at Barbagallo Raceway today, ahead of this weekend’s V8 Supercars Perth 400.

Although Rick and Todd finishing 21st and 25th overall respectively after 60 minutes of running, Rick was as high as tenth quickest in the second session, with the duo trying out multiple different setups on the unique track surface.

“It was a really up and down day for us,” said Rick Kelly.

“We started out pretty reasonable, we ran pretty good tyres today and tried a lot of different things with the car.

“We got the car to quite a reasonable spot I think, and had reasonable pace.
“We tried a few things in that last session to make up for the bit that we were lacking, but unfortunately I think we went the wrong way.

“We put on good tyres at the end, and it shot us backwards at a million miles an hour.

“If anything, we learned what not to do which is good, because generally we are pretty conservative, but we really wanted to learn about the car and make a gain.

“I think we achieved that here today, and we’ve got a good direction for tomorrowand know what we really need, because Barbagallo is very different to everywhere else we go.”

“We didn’t get a good run, or really a run at all in the end of the final session on the only set of decent tyres we had for the day,” said Todd Kelly.

“We only had one lap before the chequered flag to do it, so it’s a shame we don’t really know where we are.

“It has been a bit of a struggle to be honest, the lap times just aren’t there.

“There’s a little thing here or there with the car, but it’s not going to move us 25 spots up the grid, so we’ve got quite a bit of work to do overnight to put our finger on where the issue is.”