Positives to draw from The Bend for Grove

Positives to draw from The Bend for Grove 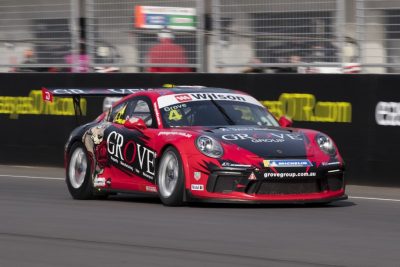 Despite a character building weekend, Stephen Grove maintains there are still some positives to draw from Round 6 of Porsche Wilson Security Carrera Cup Australia and The Bend Motorsport Park.

Grove headed into the weekend and the brand new 4.95km venue in the lead of the TAG Heuer Pro-Am standings after a consistent first part of the season.

Things proved tricky on Friday as teams worked hard on setups and adapting to the country’s newest permanent racing facility, with a pair of 30-minute practice sessions on offer.

Saturday was headlined by the latest Endurance Cup race, which took place over 20 laps; Grove crossing the line fourth in class at the chequered flag.

Race 2 didn’t go as planned when Grove was involved in an incident early on in the eight lap encounter and ended up facing the wrong way before ultimately finishing sixth in the Pro-Am order.

The final race of the weekend also saw Grove end up in the wrong direction, with further contact on the opening lap dropping him down the field.

Leaving The Bend, Grove now has a 24-point deficit to the Pro-Am class leader, but with Bathurst up next, the Melburnian is confident he can claw back the margin.

“For sure the weekend was a challenging one, it was quite a difficult pill to swallow,” he said.

“All weekend we worked quite hard on the car but external circumstances continually took us out of contention.

“Unfortunately, we never go the chance to showcase what the car was capable of with contact coming quite early in each of Sunday’s races.”

Grove said he was impressed with the all-new South Australian circuit, crediting owner and fellow Carrera Cup competitor Sam Shahin as well as the efforts of everyone involved in the facility.

“Sam has done an amazing job with the facility, it was a credit to him and all of his team for the event they put on. I’m really hoping we are able to go back to The Bend next year,” Grove added.

The experienced racer now sets his sights on the next round of Carrera Cup Australia at Bathurst’s iconic Mount Panorama Circuit, which takes place from October 4-7.

Before then, however, Grove Racing’s Brenton Grove will be on track in the Dunlop Super2 Series round at Sandown Raceway from September 14-16.