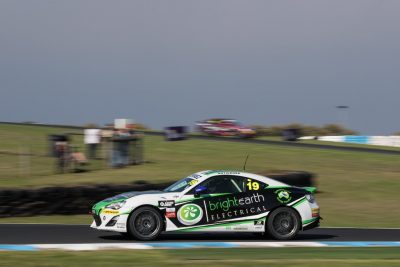 After his opening Toyota 86 Racing Series round for 2018, Gutierrez reflected on the positive weekend, in which he learned about his new car and made progress to compete with the leading contenders by the end of the weekend.

Gutierrez proved that his hard work over the offseason to build the new car had paid off when finished in the top 15 after both practice sessions on Friday.

Unfortunately for the South Australian driver, that speed wasn’t reflected in qualifying with the team admitting they went the wrong way on setup. As a result, he ended up starting the opening race from 26th in the competitive 39 car field.

Race 1 didn’t go exactly to plan either, a minor issue at the start saw Gutierrez tumble down the order. However, the Adelaide based driver didn’t panic and knuckled down to work his way back up to 22nd by the end of the race.

With the issue from the first race resolved, Gutierrez continued to show his true potential working his way through the field to finish 13th in the second race.

Gutierrez maintained that progress in the third race to move up to ninth, mixing it with seasoned veterans of Toyota series.

After the weekend Gutierrez was happy with the end result. Ending the weekend 11th in the championship standings.

“I’m absolutely over the moon with the weekend’s results. A can’t thank everyone who helped to make this all possible enough. Super proud of our little team!”

“Sitting 11th in the championship points has exceeded my own expectation and are really pumped for the rest of the year.”

The next round of the Toyota 86 Racing Series will be held in Townsville on July 6-8.