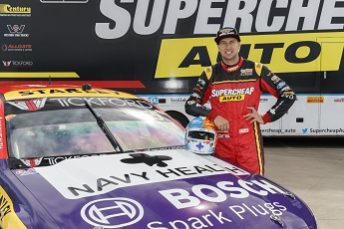 Prodrive Racing (Australia) will enjoy increased support from not-for-profit health fund Navy Health for the remainder of the 2017 Supercars Championship with the company’s logo to appear on the bonnet of Chaz Mostert’s Supercheap Auto Racing Supercar until season’s end.

Navy Health have been a partner of the team for the last three seasons and have increased their backing of the team heading into the high-profile Endurance Cup which commences with this weekend’s Sandown 500 in Melbourne.

“We are very happy Navy Health is increasing their support of the team through Chaz and the Supercheap Auto Racing entry as it shows how well they regard the team and the sport,” Prodrive Racing Team Principal, Tim Edwards said.

“They were new to the sport when they joined us partway through the 2015 season and to see them enjoy the benefits of the partnership enough to expand their involvement is a credit to all involved.”

Mostert, who partners with the experienced Steve Owen for the next three events, was pleased to see the expansion of the partnership.

He currently lies fifth in the points and welcomes Navy Health’s addition to the retro-liveried Supercar he is running at Sandown as part of the sport’s Retro Round celebrations.

“It is great to have Navy Health onboard in a bigger way for the rest of the season starting from Sandown as they are a great supporter of mine and the team,” Mostert said.

“I am a Navy Health member and they looked after me and helped me after my big crash at Bathurst a few years ago so their assistance and support is always welcome.”

Navy Health CEO, Ron Wilson added that, “we’re excited by the opportunity to enhance our partnership with Prodrive Racing (Australia), continue our relationship with Chaz, and be along for the ride as we head into the most exciting part of the Supercars season.”

Navy Health is a not-for-profit, members own health fund for the wider Defence community. If anyone in your family (parent, grandparent, etc) was ever a part of the military you could join – most people are eligible. To find out more go to navyhealth.com.au