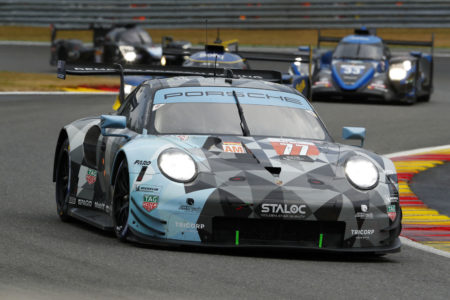 The Porsche GT Team has scored its second win of the season at round six of the FIA World Endurance Championship WEC. The reigning GTE-Pro world champions Kévin Estre from France and Michael Christensen from Denmark took the flag in first place at the wheel of the No. 92 Porsche 911 RSR at Spa-Francorchamps, Belgium. In a chaotic race with heavy rain and three safety car phases, the factory squad kept cool at all times. Implementing a perfect tactic and with a strong driving performance, the successful team of the sports car manufacturer from Stuttgart won the race from pole position. Italy’s Gianmaria Bruni and his Austrian teammate Richard Lietz achieved fifth place in the ca. 515 hp sister car with the starting number 91. In the GTE-Am category, the experienced Dempsey-Proton Racing customer squad finished the race in second place.

Shortly before the start of the rehearsal for the upcoming season highlight in Le Mans, the sky over the Belgian Ardennes opened its floodgates. Heavy rain flooded the racetrack to such an extent that the six-hour race had to start behind the safety car. When the race finally went green, the rain eased off but the works drivers found that their two Porsche 911 RSR offered barely any grip. Only when the track began to dry the two crews could catch up. Another heavy shower in the first half of the race resulted in a second safety car phase. Again, the two GT racers from Weissach lost ground. When the sun reappeared after three hours of racing, the strengths of the new 911 RSR also emerged. Christensen and Estre drove consistently fast stints and their team’s clever tactics helped them return to the front. Bruni and Lietz were unable to improve significantly in the close battle between the manufacturer teams.

In the overall standings, the second-placed Porsche factory squad managed to reduce the gap to the top. In the drivers’ championship, the defending champions Estre and Christensen advanced to second place.

In the GTE-Am class, the customer team Dempsey-Proton Racing claimed its first podium result of the season. Christian Ried (Germany), the Italian Riccardo Pera and Porsche works driver Matt Campbell (Australia) achieved second place. The young Australian put in a particularly impressive drive against tough competition. Campbell launched a renewed attack in the final phase of the race and mobilised the full potential of the 2017-spec version of the Porsche 911 RSR. At the flag, he was only 2.898-seconds off securing the first win of the season. The two ca. 510 hp nine-elevens fielded by the Project 1 team finished on positions four and six, with the second 911 RSR run by Dempsey-Proton Racing taking the flag in fifth. Gulf Racing concluded round six of the 2019/2020 FIA WEC season on position ten.

The FIA WEC contests round seven on 19/20 September at Le Mans, France, where the 88th edition of the legendary 24-hour race will be held on the 13.6-kilometre circuit at the Sarthe.

Comments on the race
Pascal Zurlinden (Director Factory Motorsport): “Congratulations to the entire team at the track and to our development squad in Weissach. The Porsche 911 RSR proved extremely competitive in all sessions. In the race, the team’s and drivers’ wealth of experience paid off once again. The tactics were perfect in difficult conditions, our works drivers pushed the car to the limit at all times and brought them over the finish line unscathed. This win gives us an addition boost for the upcoming 24 Hours of Le Mans in September. We’re ready for the big highlight!”

Alexander Stehlig (Head of Operations FIA WEC): “For us, this was a perfect restart after the 172-day enforced break in the WEC. Pole position on Friday, victory on Saturday – it couldn’t be better. Spa always throws huge challenges at us. Snow last year, torrential rain this year. We had some difficulties on the wet track but as soon as it dried up, we were back. Overall, it was extremely thrilling. The fight against Aston Martin and Ferrari was fun. We couldn’t have wished for a better dress rehearsal for Le Mans.”

Michael Christensen (Porsche 911 RSR #92): “It was a rollercoaster of emotions. With the changing conditions, it became really hard to always make the right decisions. Once again, our team did it perfectly. Only in this way we could manage to drive to victory after a few setbacks on the extremely wet track – simply brilliant!”

Kévin Estre (Porsche 911 RSR #92): “What a wonderful weekend! We were fast in practice, we claimed pole position and won the race. The team put in a tactically strong performance. The second half of the race was on a dry track. It was precisely in this critical phase that we were back in full force and able to call on the full potential of our Porsche 911 RSR. We’ve taken an important step forward in the overall standings. At Le Mans, we aim to pick up exactly where we left off and go all-out.”

Gianmaria Bruni (Porsche 911 RSR #91): “That was a difficult race for us. We lost a lot of time because we drove too long on wet tyres at the wrong moment. We took a gamble and tried to make up for it later. When the sun finally came out, we were the first ones back on the track with slicks. In the first laps I slid wildly and lost a lot of time. Once the grip improved, our train had already left the station.”

Richard Lietz (Porsche 911 RSR #91): “We didn’t do much wrong, but despite the good balance, our car simply couldn’t match the pace of the sister car. Position five is what we deserved based on our pace in the race. We couldn’t do much more considering today’s conditions. It’s a shame.”