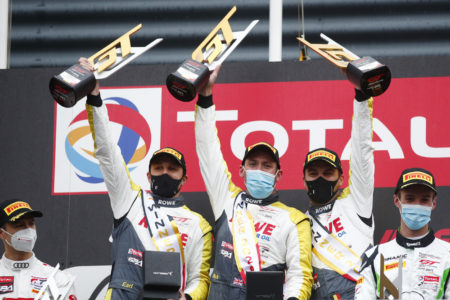 The Porsche customer team Rowe Racing has won the 24 Hours of Spa-Francorchamps. In a dramatic finale, the No. 98 Porsche 911 GT3 R driven by works drivers Nick Tandy from Great Britain, Earl Bamber from New Zealand and Laurens Vanthoor from Belgium came out on top. The trio crossed the finish line first after 527 laps on the 7.004-kilometre Formula 1 racetrack in Belgium and secured the second straight overall victory for the 500+hp GT3 vehicle from Weissach. After a fierce battle, Italy’s Matteo Cairoli and the two Germans Sven Müller and Christian Engelhart conquered the third podium step in the identical car fielded by the Dinamic Motorsport squad.

Fritz Enzinger, Vice President Porsche Motorsport: “To win under such difficult conditions cannot be appreciated highly enough. Plus positions three and four – what a super performance. My congratulations and huge thanks to the winning team of Rowe Racing and to all other Porsche customer teams as well as the engineers from Porsche Motorsport. They all did a tremendous job at Spa.”

The endurance race in the Ardennes was contested under difficult conditions with changeable weather and an often slippery racetrack. Many incidents including rain during the night resulted in a total of 18 full course yellows and 14 safety car phases. In the close competition among the 55-strong GT3 field from eleven manufacturers, the lead spot changed almost by the hour. The victorious Porsche 911 GT3 R from Rowe Racing swept into the lead for the first time early Sunday morning, after the 2015 outright Le Mans winner Tandy turned heads as the fastest driver in the field on a gradually drying track. After his teammates Bamber und Vanthoor put in impressive stints, it was again the Briton who took the limelight in the final hour. After perfect tactical decisions by the seasoned customer squad, at the wheel of his ailing car, Tandy outpaced the No. 66 Audi in a gripping final sprint. After 24 hours, he crossed the finish line with a mere 4.687-second advantage – his racing car, making alarming noises due to lack of transmission oil, would very likely not have managed another lap.

Matteo Cairoli also impressed in the final minutes of the long-distance classic. The Italian made optimal use the Porsche 911 GT3 R’s traction advantage on the wet track and fought his way up to third place shortly before the chequered flag. The No. 12 racer fielded by GPX Racing with works drivers Mathieu Jaminet, Patrick Pilet (both France) and Matt Campbell (Australia) reached the finish line in fourth place after an equally strong charge through the field, with the No. 40 sister car finishing on eleventh. The maiden Spa outing for the Frikadelli Racing team with Porsche ambassador Jörg Bergmeister as one of the driver-crew concluded the marathon in position eight.

The KCMG customer team, however, was plagued by bad luck in this year’s race. The No. 21 car retired early due to persistent vibrations at the rear of the Porsche 911 GT3 R. The sister car of last year’s winners Michael Christensen from Denmark, Kévin Estre from France and Richard Lietz from Austria lost five laps due to a wheel carrier defect and ultimately finished on 13th place. The Herberth Motorsport squad, which had at times led both the Pro-Am and Am-categories, lost both vehicles in accidents. The No. 56 entry from Dinamic Motorsport and the Rowe Racing’s No. 99 car also had to retire early.