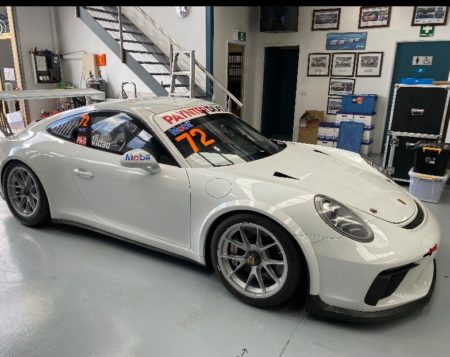 Experienced Porsche racer Paul Kelly is eager to get back into racing this summer when round one of the Rodin Cars Super GT Series gets underway at Highlands Motorsport Park in January.

Christchurch based Kelly will enter the Porsche Class of the series in a Porsche 991.2 Cup Car which he recently purchased out of Australia.

“The car is almost brand new – It only had a few hours of running for a test before it was parked up,” says Kelly.

No stranger to Porsche Carrera Cup cars, Kelly competed in the Australian championship from 2011 to 2013. There, he recorded a best championship result of 10th overall, and coming second in the Elite Class by seasons end in 2011.

When the new Rodin Cars Super GT Series was mooted, Kelly says he was immediately attracted to it for a variety of reasons.

“I haven’t raced seriously for a while, but what really attracted me to the series was the parity aspect. The Porsche class cars are all the same – it’s a true one make series.”

“The quality of the machinery up and down the field is truly world-class. Those McLaren GT4’s are really something else, and I see that there will be seven of them racing – it’s great for the sport whether you’re a competitor or just a fan.”

“From what I’ve seen of the entry list, there are some very capable drivers entered. I think there will be some tight battles throughout the field.”

Kelly says the compact four-round calendar suits a busy work schedule and a family summer holidays over the new-year break.

“The timing also works really well for me. I can have a holiday down in the Wanaka/Cromwell region with the family, do a bit of racing, then the following weekend shoot up to Christchurch and do the Ruapuna round, then go back.”

“I’m really looking forward to loading up the truck and trailer and heading north to Hampton Downs and Taupo a few weeks later.”