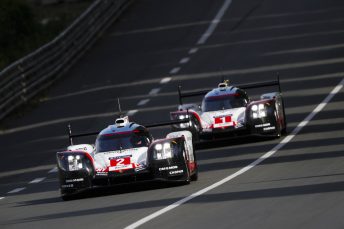 The countdown for the season highlight is almost at an end: Over June 17-18, Porsche will again fight for the crown jewels of endurance motorsports in attempting to win the 24 Hours of Le Mans for a third consecutive year. The toughest competition on track is Toyota. The Japanese manufacturer has yet to win Le Mans. In 2016, Toyota retired in a dramatic finish just minutes before the end of the race with a technical failure and in 2017 competes with three cars against the two Porsche 919 Hybrid in the top LMP1-H class.

Behind the wheel of the Porsche 919 Hybrid with start number 1 Neel Jani (33/CH), André Lotterer (35/DE) and Nick Tandy (32/GB) will alternate. The three drivers share a combined experience of 20 Le Mans starts and five overall victories. Jani (8 starts, 1 overall victory) is the only Le Mans title defender and reigning FIA World Endurance Champion in 2017 and is also the qualifying lap record-holder at Le Mans since 2015. Lotterer (8 starts, 3 overall victories) faces his first Le Mans race with Porsche after a successful career at Audi. For the second time, Tandy competes in the LMP1 class at the Sarthe. He raced there three times in GT and celebrated Porsche’s 17th overall victory as an LMP1 rookie in 2015.

The crew of the sister car – Earl Bamber (26/NZ), Timo Bernhard (36/DE) and Brendon Hartley (27/NZ) – shares a total of 17 Le Mans participations and two overall victories. Bamber (2 starts, 1 overall victory) won in 2015 together with Tandy when he too was an LMP1 rookie. In 2016, he competed for Porsche in the GT-class. The most experienced of the trio is Bernhard: He has started Le Mans ten times, the first time in 2002 for Porsche in the GT-category – scoring a class victory on his debut. Since 2010, his name is also engraved on the trophy for an overall victory, when the Porsche works driver was loaned to Audi. Hartley (5 starts) has shared a cockpit with Bernhard since 2014 and is arguably the hungriest of them all: the big win at Le Mans has so far eluded him.

“Le Mans 2017 is going to be an extremely hard race, maybe even faster than 2016”, Fritz Enzinger says in full awareness of the great contest. The Vice President LMP1 confirms: “This will not be a duel against Toyota alone. The toughest challenge at Le Mans is the race itself. You must not ever lose the respect for those 5000 kilometres covered day and night in changeable weather conditions and at speeds in excess of 330km/h while constantly overtaking and lapping competitors. There is no guarantee, things can happen at any moment. You only have a chance of winning the big trophy at Le Mans by fully preparing in advance, work flawlessly and then have an incident-free race.”

Team Principal Andreas Seidl adds: “It is not just the sheer race distance that makes Le Mans the most difficult race in the world. You must pace yourself and manage resources during the entire event. It lasts over two weeks and during this time a workforce of 90 men work closely together in limited space and under great tension. They experience highs and lows together. That said on Saturday at 3pm, every single team member – whether mechanic, driver or anyone in the team – needs to be physically and mentally fresh for the race. That’s when it counts to execute all what we have learnt and practiced. We have done everything we could to be technically, and on the operational side, prepared for Le Mans. The Porsche 919 Hybrid, our strong driver line-up and the team are ready to give it everything.”

The Porsche 919 Hybrid has been widely reworked for the 2017 championship. 60 to 70 per cent of the Le Mans prototype’s components are new developments. This especially concerns the areas of aerodynamics, chassis and combustion engine. However, the power train in principle remains the same. The innovative hybrid race car develops a system power of around 900 HP (662 kW) that comes from a compact two-litre turbo charged V4-cylinder (nearly 500 PS/368 kW) and two different energy recovery systems – brake energy from the front axle combined with exhaust energy. The combustion engine drives the rear axle while the electro motor boosts the front axle with an output of more than 400 PS (294 kW). The electrical energy that comes from the front brakes and the exhaust system is temporarily stored in a liquid-cooled lithium ion battery.

The 24-hour race is the third of nine rounds of the 2017 FIA World Endurance Championship. After the first two six-hour races (Silverstone and Spa), Porsche has scored 61 points and ranks second in the constructors’ standings behind Toyota (69.5). In the drivers’ standings Bamber/Bernhard/Hartley (33 points) are in second place with Jani/Lotterer/Tandy ranked third (28 points). The leading Toyota duo has 50 points.

The story of success

Back in 1970, Porsche managed its first and long awaited overall race win at Le Mans. Until 1998 there were 15 more of that to follow, but then Porsche refrained from competing in the top category for 15 years and only scored some class wins. In 2011, Porsche decided to return with a prototype. The World Endurance Championship’s new efficiency regulations offered exactly what Porsche always was seeking in top level motorsports: a platform for research and development of future technologies for road cars.

2012 and ‘13 were dedicated to preparation. New buildings appeared at the Porsche R&D centre in Weissach near Stuttgart. Fritz Enzinger assembled a team that now numbers 260 highly qualified employees. The first Porsche 919 Hybrid was born – an entirely new car featuring hybrid technologies that were relatively previously unknown. The early days were difficult but the progress was significant.

2014 became the debut season of what remains today the most innovative race car in the world. At its first Le Mans attempt, 20 hours into the race, a 919 Hybrid took the lead but retired two hours later with an engine failure. In 2015, Porsche entered a third 919 Hybrid for Earl Bamber (NZ), Nico Hülkenberg (DE) and Nick Tandy (GB) and it was this trio of LMP1 rookies who took the 17th overall Le Mans win for Porsche – the first since 1998. Porsche repeated the overall race win last year courtesy of Romain Dumas (FR), Neel Jani (CH) and Marc Lieb (DE) after battling with Toyota for many hours.

Schedule for the Porsche LMP Team

The technical inspection of the 60 racing cars, which are subdivided into four classes, begins on the Sunday before the race, June 11, at the Place de la République. It is a public event in the city centre. The scrutineers examine the cars while the 180 drivers must present their paperwork. The Porsche LMP Team is scheduled for this inspection on Sunday from 3:20 pm onwards.

In Australia, the 24 Hours of Le Mans will be broadcast on Eurosport. The broadcast will begin on Saturday June 17 at 10:45pm (AEST) and conclude at 11:15pm on Sunday June 18.

Porsche websites: www.porsche.com/lemans offers a 24-hour web special with the live onboard cameras from the works cars’ cockpits. Additionally, the video stream offers interesting telemetry information about the current car conditions. Furthermore the website includes a live ticker and live standings as well as images and videos from the Le Mans race action.

Facebook: On Saturday at 3pm the race start is broadcasted live from onboard the best placed 919 Hybrid at www.facebook.com/porsche

App: The official WEC App can be downloaded free of charge with an extended (not free of charge) version available which includes full ACO live streaming and full timing of the Le Mans 24-Hours. The live stream is voiced and includes live interviews.