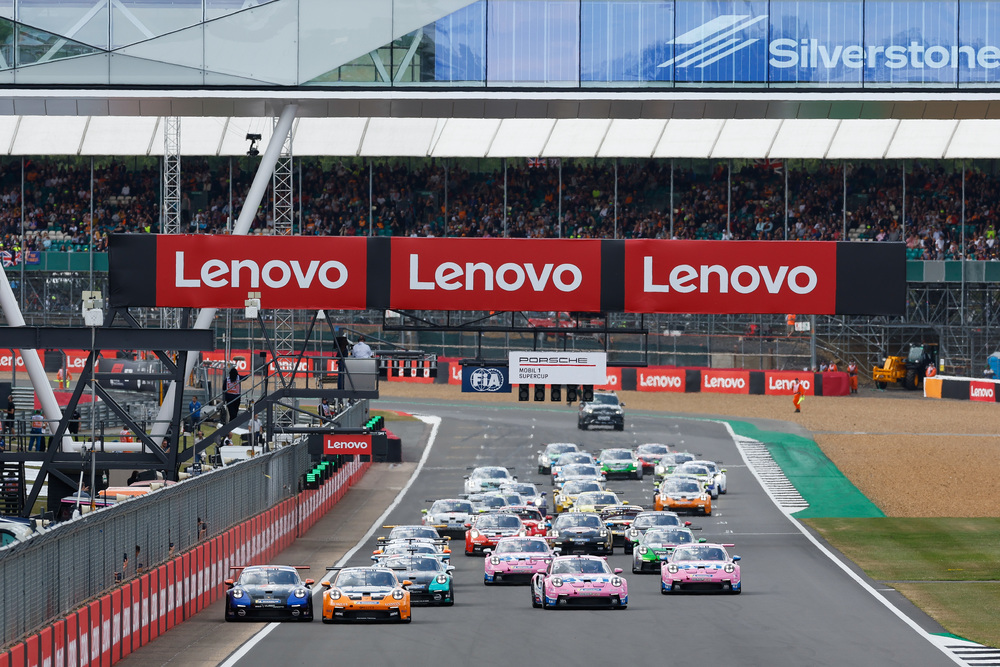 On the Formula 1 circuit in Silverstone, Porsche Junior Laurin Heinrich (D/SSR Huber Racing) scored his first Supercup victory of the season. The 20-year-old German beat Larry ten Voorde (NL/Team GP Elite), who had taken up round three of the Porsche Mobil 1 Supercup from pole position. The third podium step was occupied by British racer Harry King (BWT Lechner Racing).
The decisive moment happened in the first few seconds: Dutchman Larry ten Voorde from Team GP Elite fluffed his start from pole position. This left the door open for Laurin Heinrich who grabbed his chance – the German won the sprint to the first corner in his ca. 375 kW (510 PS) Porsche 911 GT3 Cup fielded by the SSR Huber Racing squad and snatched the lead. Ten Voorde then had to settle in behind Harry King. However, still in the first lap, the Dutchman reclaimed his second place from the local hero driving for BWT Lechner Racing.

“My strategy was to draw alongside Larry as quickly as possible after the start. I knew that I’d be on the inside at the first corner and that was the more favourable line – this plan worked perfectly,” said a delighted Heinrich after claiming the second win of his Supercup career. Ten Voorde, on the other hand, was critical of his performance: “I reacted too late at the start. Luckily, I managed to counter Harry’s move but I didn’t have a chance against Laurin.”

This was the same situation for the restart after the safety car, which was deployed after a midfield collision during the first lap. With a catapult start, Heinrich maintained his commanding lead over ten Voorde and controlled the race to the flag. “Larry was faster than me in some passages, but I had the advantage in other sections. For me, the race was more strenuous than it might have looked,” explained the Porsche Junior, who has moved up the points table to position two thanks to this victory.

Securing second place, Larry ten Voorde still managed to defend his championship lead in the Porsche Mobil 1 Supercup. Harry King took the flag in third place. The British racer had to fend off his BWT Lechner Racing teammate Dylan Pereira over the race distance. “Shortly after the start, after I got past Larry, I attempted to overtake Laurin as well. I made a mistake, which enabled Larry to reclaim second place. After that, it was all about not making any mistakes in the duel with Dylan,” concluded King.

“That was a strong race from Porsche Junior Laurin Heinrich. He kept his cool in the duel with Larry ten Voorde, who is a two-time champion of the Porsche Mobil 1 Supercup. I’m also pleased to see drivers from three different teams on the podium. I’m looking forward to the next race at the Red Bull Ring, which will no doubt be just as enthralling,” stated Oliver Schwab, Project Manager Porsche Mobil 1 Supercup.

Supercup rookie, Aaron Love endured a tough Supercup debut with the Martinet by Alméras team finishing in 30th position with a puncture. The Carrera Cup Australia driver posted to social media after the event, “Pretty tough first Supercup weekend and it just went from bad to worse. We made a few mistakes with the plan for practice which didn’t let us truely show our speed. This just continued to hang over our heads in qualifying as it started to rain at the start and just missed the chance to set a lap before it got completely wet. Started from 29th and got up to 15th and no doubt I could’ve gone further but it wasn’t meant to be. A car spun in front of me and with nowhere to go I just didn’t quite make it around ending with a puncture ruining the race. That’s just racing and we’ll live to fight again.”

Only a week’s break before the next Supercup race
From Silverstone, the teams contesting the Porsche Mobil 1 Supercup head straight to the Red Bull Ring in the south of Austria. On the Formula 1 circuit in Styria, round four of the international one-make cup with the Porsche 911 GT3 Cup will be held next weekend (8 to 10 July 2022) as part of the Austrian Grand Prix support programme.

Today’s Red Bull Ring goes back to the Österreichring, which was opened in 1969 near Zeltweg, but actually in the municipality of Spielberg. From 1970, the then six-kilometre racetrack was part of the Formula 1 World Championship. In 1995 and 1996, the Österreichring was modernised and the name was changed to A1-Ring. After another modification and since the reopening in 2011, the 4.318-kilometre circuit has been called Red Bull Ring.

Last season, two rounds of the Porsche Mobil 1 Supercup were held at the Red Bull Ring. The eventual champion Larry ten Voorde (Team GP Elite) from the Netherlands won the race held as support to the Grand Prix of Styria. Jaxon Evans (Martinet by Alméras) from New Zealand claimed victory at the Supercup race run as part of the Austrian Grand Prix support programme.