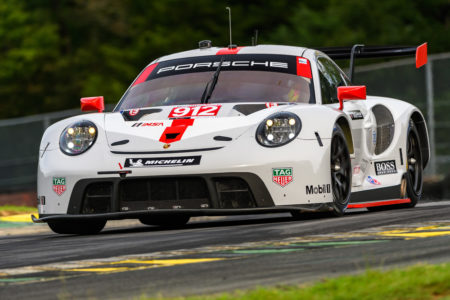 The Porsche GT Team has big plans for the next highlight on the IMSA WeatherTech SportsCar Championship calendar: At the upcoming sixth round of the season on 5 September at Road Atlanta in the US state of Georgia, the squad is determined to clinch the first win of the season with the two new Porsche 911 RSR.

At the previous three races, the 515 hp GTLM-sports car from Weissach was well on course to score its first class win of the year in North America, only to have bad luck strike every time.

The race on the storied circuit near the town of Braselton runs over six hours and is regarded as a critical rehearsal for the classic Petit Le Mans event, which is held at the same venue in October. In the GTD category, the Wright Motorsports customer team fields a Porsche 911 GT3 R.

The race
Road Atlanta just outside the capital of the US state of Georgia holds special significance for Porsche. The 4.088-kilometre racetrack is the home turf of the factory squad. Porsche North America has its headquarters in Atlanta.

In recent years, the Porsche GT Team has celebrated great successes at the fast circuit with its twelve turns. At the so-called Petit Le Mans, the traditional ten-hour race contested at Road Atlanta, the sports car manufacturer from Stuttgart has notched up a total of 20 class wins. In 2015, the Porsche 911 RSR scored a sensational overall victory in the rain – beating all prototypes.

Last year at Road Atlanta, the Porsche GT Team put in a strong performance with a pair of vehicles decked out in the Coca-Cola livery and made a clean sweep of all IMSA championship titles. Due to the coronavirus pandemic, the upcoming six-hour race has been added to the calendar as a substitute for the Watkins Glen round and therefore counts towards the IMSA Michelin Endurance Cup. This series includes the endurance classics at Daytona and Sebring as well as both Road Atlanta races. The series returns to the track in America’s south for Petit Le Mans.

The 2015 outright Le Mans winner from Bedford was one of the crew to clinch victory at Petit Le Mans five years ago. Back then, Tandy shared the winning car with his works driver teammates Patrick Pilet from France and Austrian Richard Lietz. In the manufacturer’s classification, Porsche heads to round six ranking third, 14 points behind the leader.

The customer team
In the GTD category for vehicles complying with the FIA GT3 regulations, Wright Motorsports fields an over 500-hp Porsche 911 GT3 R. The cockpit of the No. 16 car is crewed by the American works driver Patrick Long and his compatriot Ryan Hardwick. Since Hardwick comes from the metropolis of Atlanta, the upcoming event is a home race for the talented hobby driver. In the overall classification, the Porsche customer team Wright Motorsports currently lies in fifth place.

Live streaming of the race
Round six of the IMSA WeatherTech SportsCar Championship at Road Atlanta takes off on Saturday, 5 September, at 11.35 p.m. local time (5:35 p.m. CEST). The race over six hours can be viewed outside the USA and Canada on www.imsa.com.

The Porsche 911 RSR
The Porsche 911 RSR (2019 model year) celebrated its debut in the IMSA SportsCar Championship at the 24 Hours of Daytona in January. Compared to its extremely successful predecessor model, the Weissach engineers made improvements to the ca. 515-hp car, most notably in areas such as drivability, efficiency, ergonomics and serviceability. About 95 percent of all components are new. The 911 RSR is powered by a 4.2-litre, six-cylinder boxer engine.

This is the IMSA SportsCar Championship
The IMSA SportsCar Championship was founded in the USA and Canada in 2013 after the merger of the American Le Mans Series and the Grand-Am Series. A year later the new sports car race series, which is organised by the International Motor Sports Association (IMSA), was contested for the first time. Sports prototypes and sports cars start in four different classes: GTLM (GT Le Mans), GTD (GT Daytona), Dpi (Daytona Prototype international) and LMP2 (Le Mans Prototype 2). The new Porsche 911 RSR is fielded in the GTLM class, and the Porsche 911 GT3 R contests the GTD class.

Comments prior to the race
Pascal Zurlinden (Director Factory Motorsport): “Although we’ve experienced bad luck at the last three races, we’re heading to Road Atlanta feeling highly motivated. I’m absolutely sure that we’ll soon achieve results that reflect the hard work of the team and drivers in the IMSA series, as well as the strengths of the Porsche 911 RSR. We’ll do everything within our power to finally bring home the first win of the season at the long-distance race at Road Atlanta and to gain some essential ground in the championship.”

Steffen Höllwarth (Head of Operations IMSA Championship): “Everything continues at high revs. We’re feeling galvanised and we’re really looking forward to the long six-hour distance. We’ve always been particularly strong at such endurance races, and Road Atlanta is one of the venues where Porsche has been very successful in the past. In the last three races, we weren’t able to get the points that matched our efforts, unfortunately. But one thing is certain: the performance of the new Porsche 911 RSR is extremely good. We’re always good for a win with this car. And that won’t change at Road Atlanta. From now on, it’s important that we reduce the gap to the top by achieving maximum success.”

Frédéric Makowiecki (Porsche 911 RSR #911): “I really like this track. I have many great memories when I travel to Road Atlanta – especially our class victory in 2018. We can be proud of our achievements so far this year, but we’re still missing the deserved results. We have to change this as quickly as possible. Road Atlanta is the perfect place for Porsche to finally climb to the very top of the podium again.”

Nick Tandy (Porsche 911 RSR #911): “This race at Road Atlanta has a few new elements. For the first time, we’re driving over six hours and there’s only two of us sharing driving duties. That’ll be interesting. I really hope that everything goes smoothly this time – then nothing can stand in the way of a win. The event is especially important because, over this weekend, all of the teams want to prepare for Petit Le Mans, which is held in October.

Earl Bamber (Porsche 911 RSR #912): “For us all, Road Atlanta is one of the most beautiful motor racing venues in North America. Porsche has already notched up an incredible number of victories there. Now we’d like to add to this list of successes. The new Porsche 911 RSR has been fast everywhere so far – this fabulous racing car belongs on the winner’s list. Unfortunately, luck hasn’t been with us so far, but that will change. I’m totally convinced of this.”

Laurens Vanthoor (Porsche 911 RSR #912): “The last three races were really frustrating. Three times we were in the lead and on course for a sure victory, but something always came up. Let me describe it more figuratively: In the big IMSA casino, we’ve had a run of bad luck so far. Now we have to go “all-in” and “all-out” to keep our chances alive in the championship.”