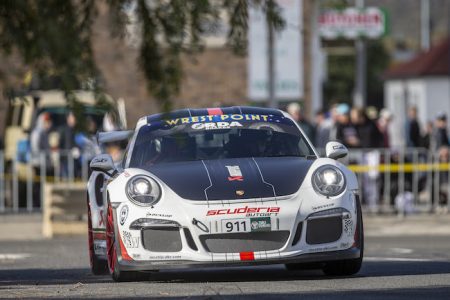 Matt Close is primed to resume his arm wrestle with one of the most successful tarmac racers in Australia at Targa Tasmania from April 29-May 4.

While under no illusion of the gravity of stopping the all-conquering Dodge Viper of Jason and John White, Close is looking forward to another challenge.

Going into the final day, Close had reduced the gap to just 27 seconds, stepping up the prospect of a grandstand finish, reviving memories of Greg Crick’s victory at the maiden Targa in 1992.

However, all the good work came unstuck on opening Tinderbox stage on Day 6 when Close overstepped the mark on cold tyres, spearing into a fence and plunging out of the event.

It was a gut-wrenching end that had seen Close and Reeves come up short after their highly entertaining week-long assault to haul in the hulking American machine.

Accepting full responsibility for being “too greedy”, Close regrouped and returned to Targa High Country last November, finishing just 30 seconds behind White in the outright standings.

“Last year we stuck to a plan which was to apply a bit of pressure early and it had gone well, but unfortunately we didn’t execute on the final day,” Close, the 2016 Targa Tasmania GT2 winner, said.

“It was ours to grab if we wanted to have a go and unfortunately we overstepped the line a bit.

“We had a new suspension and new tyres at this event last year so in that regard I’m a bit more up to speed with the traits of the car now.

“Hopefully we can be a bit quicker early on in the rally than we were in 2018.”

Close says that while they are at a distinct horsepower disadvantage, he remains focussed on his own performance and predominantly wants to enjoy the Targa spirit.

“I just focus on what we do in our own car and don’t tend to worry about anything else,” Close said.

“There are three other Porsche GT3 RS entries this year so as long as I’m the leading Porsche, then we’ve done our job.

“We are hoping the Porsche can do what it always does and that is be reliable.

“At High Country last November we hardly took a wheel off the car in service. I don’t take mechanics with me on these events just a few people to help out with general maintenance.

“First and foremost I’m in it to just enjoy the event. We will just tuck our wings in and try to do as best job as we can.”

The Whites are gunning for a record-equalling mission of eight outright Targa Tasmania victories.

Their Dodge Viper is unbeaten in the last four CAMS Australian Targa Championship outings, a stretch which started when they claimed their seventh Targa Tassie crown last year.

The 2018 Targa Tassie runner-up Steve Glenney switches from a Subaru WRX STI to a powerful Lotus Exige 350 and will be joined by co-driver Dennis Sims this year.

The 28th running of Targa Tasmania has drawn a bumper entry list of more than 260 machines across a multitude of classes.

Fans can get up close to all the cars at the three official TargaFests. In Launceston the cars will be on display at the Silverdome Expo on Sunday April 28 and Wednesday May 1, from 6pm to 9pm, and in Hobart, you can see the cars at MAC2 on Friday May 3 from 6pm to 9pm.