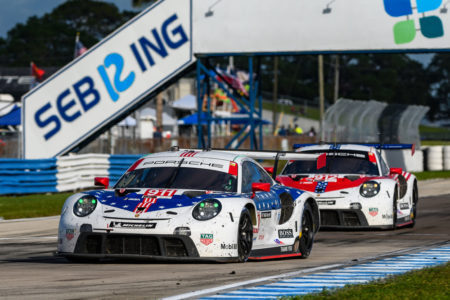 The Porsche GT Team has achieved maximum success at its final outing in the GTLM class of the IMSA WeatherTech SportsCar Championship. In the highly dramatic twelve-hour race in Sebring, Britain’s Nick Tandy, Frédéric Makowiecki from France and Earl Bamber scored a victory with the No. 911 Porsche 911 RSR. The New Zealander celebrated twice after also clinching second place in the No. 912 car, which he shared with his teammates Laurens Vanthoor from Belgium and Neel Jani from Switzerland. After contesting a total of 75 races since 2014, the North American Porsche works team has achieved 21 wins and 56 podium results. In the GTD class, the customer team Wright Motorsports took first place with the Porsche 911 GT3 R.

Pascal Zurlinden (Director Factory Motorsport): “That’s just crazy. There’s no better way to wrap up a factory programme. At the end of our IMSA campaign, we secured three wins in a row at Road Atlanta, Laguna Seca and now Sebring. That’s phenomenal. Congratulations as well to our customer squad Wright Motorsports. And let’s not forget our one-two success today at the WEC in Bahrain. There, too, we managed to celebrate another class win with a customer team. It was an incredibly successful day for Porsche Motorsport.”

In an eventful twelve-hour race in Florida, the decision in the GTLM class went down to the wire to the final 15 minutes of the race. After the last of nine safety car phases, Tandy had manoeuvred himself into the slipstream of the leading BMW. Shortly after the last restart, the frontrunner sustained tyre damage in the aftermath of a collision between several GTD vehicles. Tandy snatched the lead in his ca. 515 hp Porsche 911 RSR and held tight to his front spot to the flag. For the British racer and his teammate Makowiecki, this was the third victory in a row at the esteemed Sebring endurance classic. Bamber, who drove stints in both works cars at the season finale of the North American sports car racing series, crossed the finish line in second place, just 9.025 seconds behind. The Porsche factory squad concluded the last season with the 911 RSR in the GTLM class ranking third in the championship.

Huge celebrations as well in the pits of the Porsche customer team Wright Motorsports. Works driver Patrick Long, his American compatriot Ryan Hardwick and Belgium’s Jan Heylen brought the 500+hp 911 GT3 R with the starting number 16 over the finish line in first place. Despite the lack of grip at times and an unplanned change of the brakes, the strong trio maintained their composure in the fierce competition of the GTD class. The customer team from the US state of Ohio wrapped up the championship in second place, just two points shy of the title.

Shortly before the race, the works team bid the loyal fans of the Porsche 911 RSR farewell with a special spectacle. Five GTLM vehicles of the 2016, 2018, 2019 and 2020 generations turned three parade laps on the legendary circuit in Florida decked out in the much-loved liveries of Brumos, Mobil1, Coca-Cola and the special “Thank You” farewell wrap. To the delight of spectators, the drivers Laurens Vanthoor, Frédéric Makowiecki, Patrick Long, Jonathan Benett and Cooper MacNeil performed wheel spins and let the engines roar. On Wednesday evening, Pascal Zurlinden (Director Factory Motorsport) and Head of Operations Steffen Höllwarth thanked all employees of the Core Autosport squad at an emotional team event.

Comments on the race
Steffen Höllwarth (Head of Operations IMSA Championship): “I’m incredibly proud of the team. This weekend wasn’t easy for us. Because of the upcoming farewell, the mood was different than usual, but everyone coped just fine. We weren’t the fastest in the field, but we were the ones who made the least mistakes – and that’s how things like this happen. Suddenly you find yourself at the front. After three straight wins at Sebring, I’d say that this track has become our turf. Now it’s time to celebrate!”

Frédéric Makowiecki (Porsche 911 RSR #911): “I can’t believe it! This is the third win in a row for Nick and me at this 12-hour classic. It’s a very special and unforgettable achievement. We may not have been the fastest today, but at such moments, that’s precisely the time to throw our hat into the ring. We worked flawlessly, the crew did a perfect job and as such we virtually forced our luck. I’m over the moon.”

Nick Tandy (Porsche 911 RSR #911): “Our third straight win at Sebring, plus a double victory for Porsche – at the last outing of our works team no less! It doesn’t get better than that! Despite all the rejoicing, I feel very sad at the same time. We’ve scored so many incredible victories over the past few years and I’ve grown very close to the team. We’ll party hard tonight – so hard, in fact, that unfortunately we’ll have to postpone the loading of equipment into the trucks until tomorrow.”

Earl Bamber (Porsche 911 RSR #911/#912): “It feels somehow very strange to be called on to the podium as the winner and runner up at the same time. You don’t get that every day. I contributed only in a minor way to the victory of number 911 car, my main task was to do the stints in ‘my’ number 912 car. Our 911 RSR could never match the pace of the sister car, but we still didn’t give up. A one-two at the finale – there’s no better way to bid farewell to a racing series. It’ll remain in our memories forever.”

Laurens Vanthoor (Porsche 911 RSR #912): “There’s nothing better than such success at a farewell. This is a dream result for Porsche, of course. At the same time, I’m a little disappointed. Our No. 912 was never really up with the play in the race. We were very strong in the practice sessions, so we thought we’d have a good chance of winning. But at least it stays within the family.”

Neel Jani (Porsche 911 RSR #912): “That was a perfect debut for me at the wheel of the 911 RSR. It’s almost unbelievable that I was able to contribute to the one-two result for Porsche at the final factory outing in the IMSA series. This result makes me feel fantastic. I’m absolutely thrilled!”

Patrick Long (Porsche 911 GT3 R #16): “At times we tried to calculate theoretically because in certain phases of the race we were actually on track to claim the championship. Unfortunately, it wasn’t quite enough. It wasn’t our fault, because we made the most of it with this victory. We’re thrilled about this success. We’ll take that as a motivation boost into the upcoming season.”