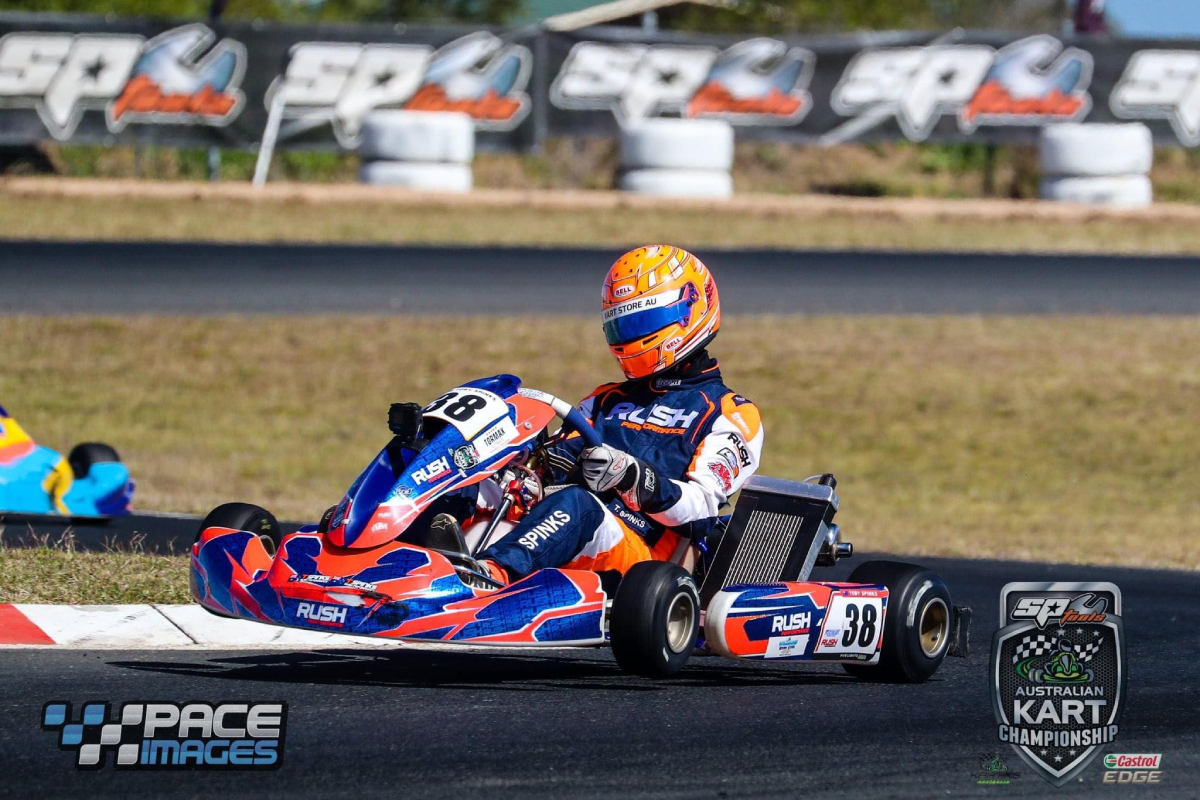 Rush Performance made the trek interstate from their base in New South Wales to the fourth round of the SP Tools Australian Kart Championship. Jamie Rush led the team of twelve drivers across four classes into the Emerald Kart Club looking for strong results. Rush Performance was joining forces with Eurotek racing for the weekend, looking to continue their drive to the front of the grid.

Pradel led the way in qualifying coming inside the top ten in position nine.

Pradel was able to set the tone in the heats running inside the top ten with a ninth in heat one, seventh in heat three and fifth in heat four.

Pope was storming through the field which cumulated in a sixth in heat four after an issue in qualifying, with Van Jour and Kostecki consistent and moving forward across the field.

Pope put in a breath-taking start to his final moving into the top three very quickly.

Jaiden was able to lead the charge and come home on the podium in second position overall.

Pradel put in another consistent driving coming home in the top ten in position seven overall.

Kostecki moved his way into the top fifteen with fourteenth position and Van Jour and Wallace both endured unfortunate DNF results.

Morrison moved up and down across the heats but had strong results of thirteenth in heat two and eleventh in heat four.

Morrison put in another stellar drive in the final, just missing the top ten and coming home in position thirteen.

Nici led the charge in qualifying setting a time just outside the top twenty in position twenty four, with Pierce down in position thirty six.

Nici had great pace burning his way through the field and having three top ten finishes across the heats. Pierce moved forward across his heats also with a top twenty finish in heat two the highlight.

Nici once again led the charge in the final putting in a sensational drive coming home in ninth position overall.

Rush Performance had a quartet of drivers in KA2 with last round podium getter Jett Kocoski, Toby Spinks, Christian Estasy and Ruben Dan.

Kocoski led the way in qualifying putting in a brilliant effort for position thirteen. Spinks and Estasy weren’t far behind in position fifteen and sixteen, with Dan just outside the thirty in position thirty three.

Kocoski was consistent across the heats racing hard on the edge of the top ten, with Spinks, Estasy and Dan all racing around the twenty with either DNF results or bad luck hurting their chances.

Estasy and Spinks were able to lead the charge in the final coming home inside the top fifteen in position twelve and thirteen.

“Great comeback for Jaiden and some mega pace all around for the team,” Rush said.

“Shame the KA2 finals got cut short but onto the next one”. Rush and his Rush Performance stable will be looking for a big end to 2022.