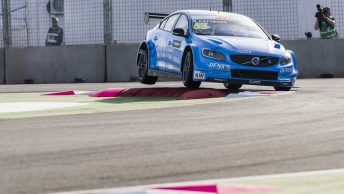 The FIA World Touring Car Championship (WTCC) reaches its half way point on the fast street circuit of Vila Real in Portugal this weekend, with just eight points separating the top three and a new “Joker Lap” being introduced.

“It’s definitely a good feeling heading to Portugal in the lead, but it also applies some pressure as you really want to remain there. Vila Real is a demanding and very fast street circuit. I think the fight with the Hondas, and especially Tiago (Monteiro), will be very tough. They usually perform well at street circuits and they are 30 kilos lighter. But we have been fast with weight this year and, as always, we will try to score as many points as possible,” said Nicky Catsburg.

Four-time STCC champion Björk reduced the gap to the championship lead from 42 points to just eight after his strong victory in the first race at the WTCC Race of Germany.

“The championship is really close and we expect the Hondas to be strong here. Some people have them as the favourites for this track and therefore the pressure is on them. While we are on full weight, we were strong in Portugal last year. I am bringing that positivity, together with the feeling from the win in Germany, with me to this weekend,” said Thed Björk.

Team-mate Néstor Girolami is looking for revenge this weekend as his streak of bad luck continued at the Nürburgring where he suffered a puncture at over 200 km/h while leading the race. The Argentinian escaped unharmed but lost vital points in the championship.

“This is motorsport. Sometime you have bad luck and sometimes you are lucky. The important thing is to stay motivated and I am definitely fired up because I know that I have the speed to be on the top. Vila Real is a really challenging street circuit with both slow corners and some very fast, blind corners at over 200 km/h. I will again do my best and work even harder with the team for our goal to win both championships,” said Néstor Girolami.

A new addition to this WTCC weekend is the introduction of Joker Laps to improve overtaking possibilities on street circuits that can prove hard to overtake on. The Joker Lap route is located at turn 26 and all drivers must take it once during both races. It is estimated to be two seconds slower than the normal lap.

“I have worked as an engineer in rallycross before where the Joker Lap originates from and it is definitely an element that creates more excitement. It’s completely new for us in the WTCC, so there are of course many unknowns. But I am leaving the tactics for our brilliant engineers,” said Thed Björk.

The fight for the manufacturers’ World Title is close heading to Portugal, with Volvo leading main rivals Honda by 40 points.

“We are looking forward to this race. It is a great event with a fantastic crowd. On paper, this should be a tough race for us but we are confident in our car, the team and drivers. We intend fight for every point available to defend our twin championship lead,” said Alexander Murdzevski Schedvin, Head of Motorsport at Polestar.