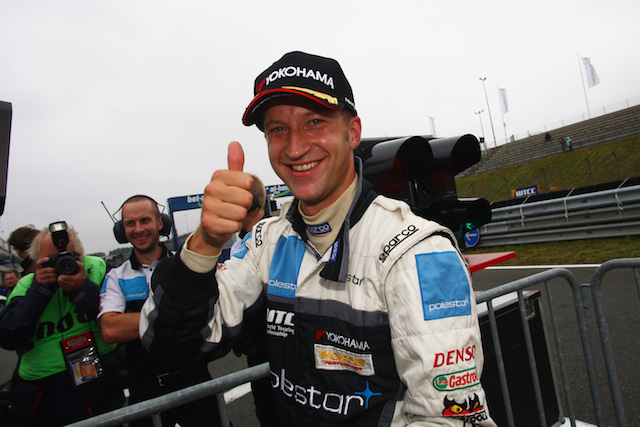 MEDIA RELEASE: Robert Dahlgren will return to the Scandinavian Touring Car Championship with Polestar Cyan Racing for the 2016 season.

”I am here to claim the title, that is my sole goal for the 2016 season. I have unfinished business in the STCC and I am glad to get the best possible conditions to take on the title challenge with Polestar Cyan Racing,” said Dahlgren.

Dahlgren, the 2010 STC Cup champion and a three-time STCC runner-up, will drive one of the two Volvo S60 Polestar race cars alongside Prince Carl Philip.

”We are very happy to announce Robert for our 2016 STCC title challenge. Robert has worked with us since 2004 and with him we don’t only get consistent performance in one of the cars, we get a vital contribution to the overall performance in the team. We can depend on his experience and qualities again in 2016,” said Alexander Murdzevski Schedvin, Head of Motorsport at Polestar, the performance brand of Volvo Cars.

The 36-year-old will continue as part of the WTCC development programme for 2016 and beyond alongside the STCC season, as well as the development of performance cars at Polestar.

”Robert is a valuable asset for Polestar Cyan Racing and we are glad to have him on board as driver for the STCC and part of our WTCC development programme,” said Christian Dahl, CEO of Cyan Racing.

Drivers for the Polestar Cyan Racing WTCC programme will be announced before the end of this year. The 2016 STCC season starts on May 1st at the airport circuit in Skövde, Sweden.