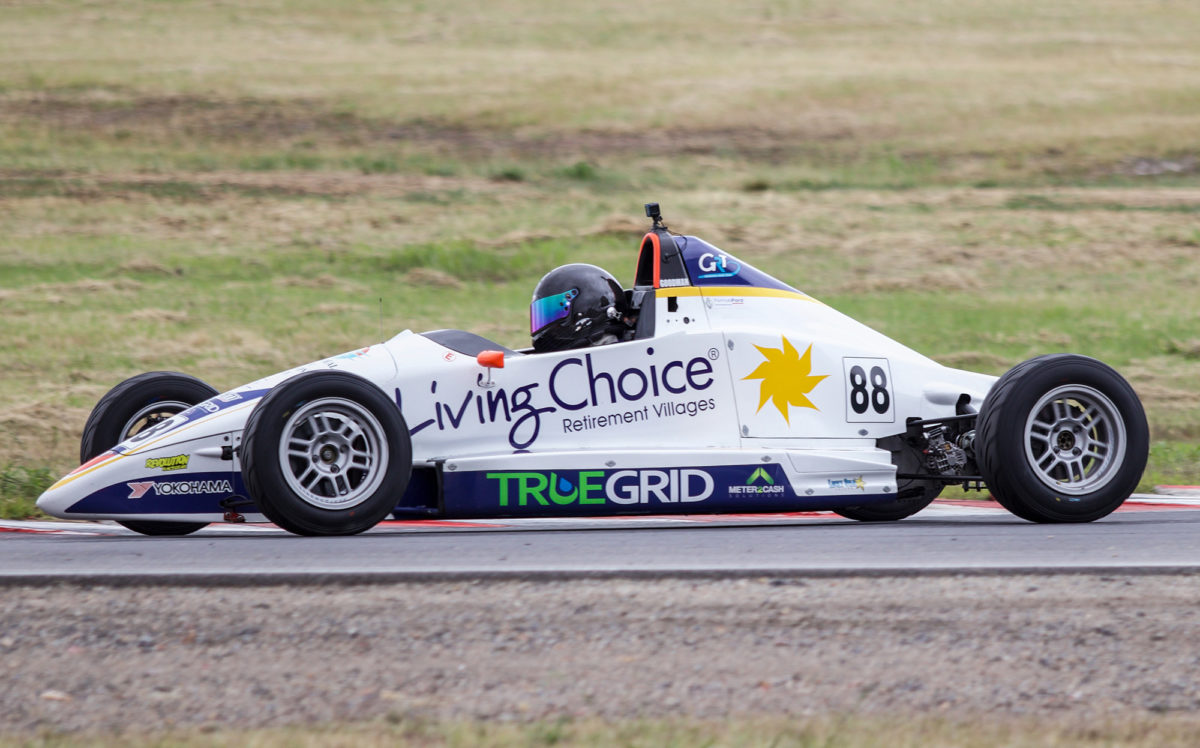 Wakefield Park in May was the previous event, however work at the Sonic Motor Racing Services workshop continued during the hiatus from racing.

Wet conditions greeted competitors on Friday and continued through to Saturday for qualifying.
Smith led the way for Sonic in seventh, with Goodman 11th and Blanchard 14th, but encountered troubles.

Race 1 was the first session to be held in dry conditions, but it was Goodman taking his first Formula Ford podium after avoiding the trouble ahead. Smith placed seventh and Blanchard crossed the line seventh, but a penalty dropped him to 10th.

It was an action packed event in Race 2 where the safety car was called on multiple occasions for incidents. In the end, Smith was able to take third, Goodman fifth after leading briefly and Blanchard seventh, although repair work needed to be done prior to the final event.

All three Mygales made it out for Race 3 after a superb effort from the Sonic team as Smith led the way in sixth from Goodman in ninth and Blanchard 11th.

Consistency by Smith gave him second for the round, while Goodman was fifth and Blanchard 10th.

The next round of the Australian Formula Ford Championship is at the famed Phillip Island Grand Prix circuit as part of Island Magic.

“It was a good weekend for us, starting with a really strong practice on Friday,” said Blanchard.

“Saturday was a bit of a mixed bag in qualifying and the race. A minor mechanical problem and a little driver issue for both of those.

“Sunday was a much better day, we proved we were stronger and we’re happy to leave the weekend with a straight car.”

“Friday was a great opportunity to drive in the wet after not doing so for a while, which prepared us well for Saturday where we demonstrated good pace,” said Goodman.

“However, when the track conditions changed and the surface dried out, we didn’t adapt well enough.

“Race 1 was good, we ended up battling with a few drivers and there were a couple incidents in front, which elevated me to third at the end.

“Sunday morning’s second race I ended up leading half a lap and was starting to create a gap, but the car encountered problems so I began to fall back.

“The final race wasn’t great as I started making mistakes and falling back a bit, but overall it was a great weekend highlighted by my first podium.”

“It wasn’t probably the weekend we were looking for. The pace was ok considering we didn’t test on Friday, which put us on the back foot there adding to a wet qualifying where we finished seventh,” said Smith.

“After an average launch in Race 1, I climbed to fifth, but we dropped back after the restart after a collision.

“Third in Race 2 was really good, but an incident after its conclusion left us lucky to make the final where after a poor start, I finished sixth.

“There’s definitely room for improvement, but it’s all learning so we’ll come back bigger and stronger at Phillip Island.”