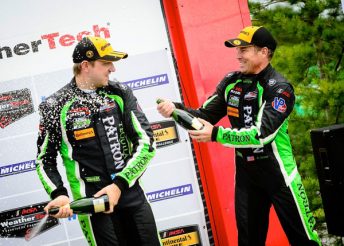 Scott Sharp and Ryan Dalziel finished third in a race that included multiple safety car periods and brief rain storms which left the teams guessing as to what tires to use.

Despite a late race shower, Dalziel was able to hold on to grab a podium finish.
He had previously returned to slick tires with 20 minutes remaining and held on in the late race treacherous conditions.

Both the ESM cars had qualified on the second row of the grid the previous day. Sadly for the No.22 entry, a mechanical issue ended the team’s day early

“It was a difficult race with the changing conditions,” Dalziel said.

“This is a hard place to pass, and traffic is such a big factor here. Scott had a great stint, and we gambled on what tires to put on.

“It hurt us initially, but with the yellow at the end, we got back up to third. If you look at race pace, I think third is what we had.”

Townsville, Queensland, Australia: Nissan Motorsport now has a few weeks back at the workshop in Melbourne to build upon the promising signs displayed at last weekend’s Townsville 400.

The Sunday event started strongly for Rick Kelly, as his qualifying performance saw him make it into the Top 10 Shootout.

The #15 Sengled Altima recorded a very smooth shootout lap and moved up from 10th to seventh for the afternoon’s 200km event.

Early contact with a competitor not only took a bit of speed out of the Altima but also forced an early second stop on lap 37 to repair a rubbing guard. Kelly then drove conservatively to the flag and crossed the line in 12th position.

The result was a strong effort from the Nissan Motorsports squad after a disappointing opening race on Saturday.

“It was great to make it into the Top 10 Shootout and then make up a few places with my one lap time,” Kelly said.

“The race pace of the car was also pretty strong. So it was a promising day for us. We had some contact in turn two on lap one, and a battle with Cam Waters resulted in some damage to the front of the car, which took the pace away.

“I made a few bar changes to compensate with what was going on, which made for a long day from a driver’s point of view. I’m pretty happy with the pace of the car and how we were able to resolve issues from the previous day’s race. It was a disappointing result overall, but a very promising weekend.”