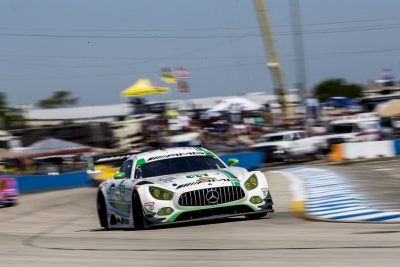 After its victory from the previous year, the Mercedes-AMG Team Riley Motorsport again finished on the podium in the 12-hour race at Sebring. In the second round of the IMSA WeatherTech SportsCar Championship that remained thrilling till the end, Jeroen Bleekemolen (NED), Ben Keating (USA) and Luca Stolz (GER) secured third place in the GTD class with the #33 Mercedes-AMG GT3 and also took the lead in the North American Endurance Cup. With SunEnergy1 Racing finishing in tenth place, another team with the Mercedes-AMG GT3 also scored a top ten result. The round of the IMSA Continental Tire SportsCar Challenge that was held on the support package of the 12-hour race was also successful: the Customer Racing Teams secured a total of four top ten results with the Mercedes-AMG GT4.

Sebring – In excellent weather conditions, a total of three Mercedes-AMG GT3 took on the 66th running of the Sebring 12-hour race on Saturday morning, including the previous year’s winners, the Mercedes-AMG Team Riley Motorsports. With their Mercedes-AMG GT3 with starting number 33, Ben Keating, Jeroen Bleekemolen and Luca Stolz started the endurance race from 14th place in the GTD class. In the opening stages that were marked by some incidents and full-course yellows, the trio quickly worked its way up. Thanks to a good pit stop strategy and faultless stints, the #33 already was on course for a podium finish after four hours and turned its first laps in the lead around the halfway point of the race. In the process, the defending North American Endurance Cup (NAEC) champions also scored valuable points for the endurance classification that were attributed after four and eight hours in the race.

In the second half of the race, several full-course yellows ensured that the differences up front remained small. Final driver Bleekemolen took over the #33 Mercedes-AMG GT3 for the closing stint while on course for a podium finish. After 321 laps of the Sebring International Raceway, the Dutchman eventually crossed the finish line only 10.122 seconds down on the winners. In the North American Endurance Cup, the Meredes-AMG Team Riley Motorsport thus took the lead in the teams’ and drivers’ standings after two season rounds.

After twelve hours, the Mercedes-AMG GT3 with starting number 75 also crossed the finish line on the same lap as the winners. The SunEnergy1 Racing car with Kenny Habul (AUS), Mikael Grenier (CAN) and Thomas Jäger (GER) had started from seventh place in class on the grid and at times also had a podium finish within reach. The #71 Mercedes-AMG GT3 of the P1 Motorsports team had some bad luck in the early stages of the race as the car briefly came off the track and lost positions. In the remainder of the race, Kenton Koch (USA), Juan “JC” Perez (COL) and Loris Spinelli (ITA) worked their way back up to 14th place in class with good stints.

Ben Keating, Mercedes-AMG Team Riley Motorsports #33: “I am very happy. We want to win the championship and it is great that we were able to take the North American Endurance Cup points’ lead here. The same can be said about the overall standings, in which we now should be in second place. I am very confident for the remainder of the season. In any case, we have very good chances in the championship now.”

Jeroen Bleekemolen, Mercedes-AMG Team Riley Motorsports #33: “That was a very good day for us. This result was very important for the championship. Finishing on the podium at Sebring is always a success. However, when you start the race as the previous year’s winners, you want to repeat it, of course. But I am happy. The team has done a great job and the race was really close. It was a hard fight for everyone, but that is why it is fun.”

Thomas Jäger, Mercedes-AMG Driver SunEnergy1 Racing #75: “First of all, I am very happy with the podium result for the #33. That is good for the championship – a great performance for which I extend my sincere congratulations. With the #75, we had a good pace, particularly in the opening stages of the race and we closed the gap to the top five. At the end, we had to fight a bit and we had problems with understeer. All in all, however, the Mercedes-AMG GT3 again has proven to be very reliable and we are happy with tenth place.”

For Mercedes-AMG Motorsport, the second round of the IMSA Continental Tire SportsCar Challenge that was held on the support package of the 12-hour race, also was a successful affair. Out of the nine Mercedes-AMG GT4 from the Customer Racing Teams that had taken the start, four cars were classified in the top ten. Stephen Cameron Racing’s Ari Balogh and Greg Liefooghe (both USA) scored the best result, finishing fourth with their #19 Mercedes-AMG GT4. Having started from 16th place on the grid, the duo moved up into the podium positions with fast laps and an effective pit stop strategy. With six laps remaining in the two-hour race, however, third place was lost and final driver Liefooghe concentrated on securing fourth position. Owen Trinkler and Hugh Plumb (both USA) finished eighth with the #46 Mercedes-AMG GT4 (Team TGM), followed by their team-mates Ted Giovanis and Guy Cosmo (both USA), who came home in ninth place with the #4 car. In tenth position, Indy Dontje (NED) and Bryce Ward (USA) rounded out the top ten with the #57 Mercedes-AMG GT4 (Winward Racing / HTP Motorsport).