Podium and points at Zandvoort

Podium and points at Zandvoort 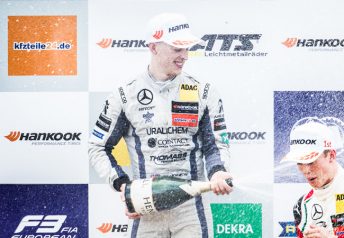 From the dense forest of Spa, the FIA F3 championship hit the beach for the seventh round of the calendar. Set in the rolling sand dunes of Zandvoort, just a short hop away from Amsterdam, the 4.3KM circuit offered up a series of sweeping twists and turns, with limited and tricky overtaking opportunities. With Tadasuke returning to his seat after recovering from his broken wrist, the full Hitech squad pulled down their visors for a weekend of pace and points.

Qualifying was a fiercely tight fought affair, with the entire field covered by just one-second. Ralf Aron battled to qualify in 5th, with Jake Hughes in 10th, followed by Nikita Mazepin in 14th. Carrying a 3 place grid penalty from his injury-inducing collision at Norisring, Tadasuke Makino lined up in 18th for Race 1.

As lights went out on a blustery Saturday morning, we all charged off the line into the long hairpin at Turn 1. However, a lock-up from Guanyu Zhou, saw Ralf’s race end before it even began, as the Prema driver sent him spinning into the path of Beckmann. A passenger to the incident, our Estonian ace was left stranded in the gravel alongside Beckmann’s overturned car, both managing to escape unscathed.

Back on track, the pack followed the safety car for much of the 20-minute race whilst the track was cleared of the 1st lap collision. Launching at the restart, both Jake and Nikita set about making up as much ground as possible in the hunt for valuable points. With the circuit renowned for its slim opportunities for overtaking, Jake pushed on to cross the line in 7th, with Nikita narrowly missing out on the final points paying place.

Turning attention to qualifying, the FIA F3 grid took to the track for an interrupted Saturday afternoon session, where our Hitech heroes punched in a series of hot laps in a bid for pole. It wasn’t long before Jake was heading the pack, carving the perfect line through the dunes on his first visit to the track, with Ralf and Nikita battling to find a gap in the close-fought field. As times began to topple in, Jake found himself drop back slightly before a red flag was called to rescue the stranded car of Daruvala who had struck the barriers.

Once the action resumed, Jake wasted no time in proving his pace to retake provisional pole but was just pipped by Ilott and Norris towards the end of the session. An off-track excursion by Beckmann in the dying seconds, threw the session into disarray with more than half the field receiving penalties after being deemed to not have slowed down enough for the yellow flags. Whilst Ralf and Nikita were pushed back suffering the fate of the yellow flag, fortune favoured Jake as his well-timed flier netted P2 for the 2nd race. Battling back from injury, Tadasuke’s pure pace provided a P14 start despite only completing 9 laps in the session.

With Jake lining up his Hitech charger on the front row, our pulses were racing as lights went out for Race 2. Spinning his tyres off the line, our Brummie wonder powered ahead of the pack to maintain his 2nd place into Turn 1. Muscling back from a 2 place grid penalty, Ralf punched up to run in the points with Nikita just behind in P11. With a safety car appearing for the second race in succession, our hungry Hitech quad was eager to take any opportunity at the restart. As leader Ilott powered away, Jake chased his tail eyeing up the few narrow lines available for the overtake.

But as the race ran on, the gap extended, with sand coating his tyres in the latter stages curbing his challenge for the win. Crossing the line in 2nd, there were more than a few cheers for Jake, as he rose the steps to claim his 4th podium of the season.

Soaked in champagne, we caught a few words with our podium finisher:

“It feels really good to get a podium, after we didn’t start the weekend where as a team, we wanted to be, especially on my side as the car was looking good from the start. At the safety car restart, Callum (Ilott) headed off as I was just too early in the corner to get the acceleration, so I couldn’t challenge him. But I managed to keep second place which was good and it’s great to get a podium. I went to bed thinking I qualified P3 and P7, woke up starting P2 and P5, so I thought I’ll take that!”

With a steady haul of points in the bag, the team set to work, ready to round off the weekend with a positive performance in the final race. It wasn’t long till the Dutch crowds were treated to a nail-biting wheel-to-wheel battle between Ralf and Nikita as they threaded their way around the tight and twisty circuit. Back on the pit wall, we held our breath as each driver left just enough room for each other, Ralf managing to hold off the challenge from his Russian teammate behind. Equally, Jake valiantly held off attempts from Piquet at Tarzan corner, to come home in 5th. Another strong points haul from Ralf in 7th, whilst Nikita was unable to halt Mawson’s pass in the latter stages, he crossed the line in 9th. Completing the race, Tadasuke gave a strong performance in 16th ahead of fellow countryman Sato and Vaidyanathan.

Collecting points in each race and a shiny trophy to take pride of place back at base, we’re revved and ready to tackle leafy Nürburgring on 9-10th September.