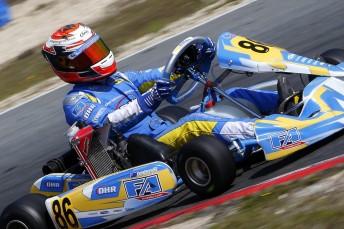 Young Cantabrian karting star, Marcus Armstrong, has started September with a strong placing in the Rotax Max Euro Challenge in Salbris, France over the weekend.

Armstrong recovered sensationally after pre-final racing incidents saw him relegated to 10th place on the starting grid for the final, utterly dominating the field on a charge to third position, less than a second behind winning Dutch driver, Richard Verschoor.

But the weekend result was merely the start of an incredibly busy September schedule for the 14 year old who stepped from the Rotax straight into testing for one of Karting’s premiere factory teams, Kosmic Racing Department, ahead of competing in not just the German DKM kart champs in Kerpen this weekend, but also the KF World championships in Essay, France on the 21st.

Before driving it for the first time two days ago, the Kosmic Racing kart was completely unfamiliar to Marcus, the engine delivers stronger performance and the tyres offer much more grip than the Rotax machines. The amplified performance was relished during testing.

“The softer compound tyres really suit my style of driving and allowed me to carry maximum speed through corners, it’s pretty exhilarating to drive on the limit,” says Armstrong.

Marcus’s lap times have been consistent and on the pace during the testing sessions, but race day promises plenty of pressure.

“With the Rotax round in Salbris, the DKM champs and World KF champs all in such close proximity,there’s no shortage of talented driver’s wanting to make a name for themselves, contact among drivers is not uncommon at this level.” admits Armstrong,

“I’ll focus on running a clean race, keeping a level head and extracting every last bit I can from the Kart, the testing has really helped with that. I have full confidence in the machine and the team, hopefully that translates to good pace next week.”

Marcus races in the DKM Champs in Kerpen, 12-14 September before battling 93 other drivers from all over the world at the KF World Championships in Essay, France on the 21st September.