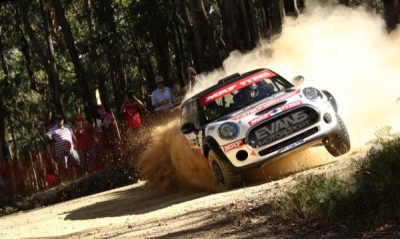 Five West Australian competitors in three cars all finished in the top ten with one on the podium in the season opener of the CAMS Australian Rally Championship (ARC), The Courier-Eureka Rally in Ballarat, Victoria.

Dominating the stages was Harry Bates (ACT) with co-driver John McCarthy (QLD) who finished first in a Toyota Yaris and Tasmanians Steve Glenney and Michael Potter finished second in a Subaru WRX STI.

The pair showed good form all weekend with a win on SS4 and top five fastest times in the remaining 16 stages.

Searcy, 39, said he was happy with the result and it was his first big event co-driving for Evans.

“It was a very high speed rally and we didn’t have too many big issues but did have lots of little issues with the car, a few over heating and power steering issues.

“It was a close rally – in the first stage on Sunday there was just 2.7 seconds separating the top four – it’s great fun to have a close competition.”

Markovic, who has been recovering from back surgery for seven months, said it was a fantastic rally.

“It was great to jump back in the driver’s seat and Toni and I gelled straight away. Our plan was to get through the event, get it under our belt and really focus on the next round the Forest Rally in April, which is our home rally,” said 40-year-old Markovic of Lesmurdie.

“The car went really well and I’m really happy with our result. All of those who finished in front of us are seeded ahead of us, so it’s a good result.

“Saturday’s stages were brilliant, really good flowing stages. Sunday’s stages were trickier with a more powdery surface that challenged the tyres a bit, but over all, a really nice event.”

John O’Dowd and co-driver Ken Shiel in a Maximum Motorsport Subaru WRX STI finished the Eureka Rally in tenth place over all.

O’Dowd said he was happy to get through the event.

“It was a very strong field and I struggled to find my rhythm to be honest,” said Gooseberry Hill resident O’Dowd.

“The car was awesome and well prepared. We got through every stage and finished the event, it’s onwards and upwards from here.”

As well as competing in the ARC, O’Dowd and Shiel will again contest the WA Rally Championship, trying to get one better on their second place last year, falling short of the title by just two points.

The Eureka Rally saw competitors tackle eight stages that were twice run, racing the clock a total of 108 competitive kilometres and travelling a 630 kilometres over the weekend.

* Subject to final confirmation by CAMS