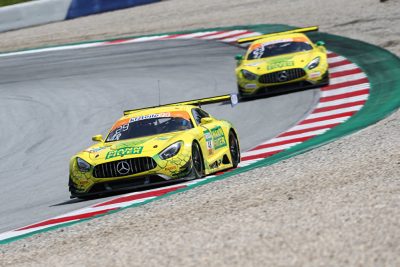 After the victory for the MANN-FILTER Team HTP Motorsport in the ADAC GT Masters at Most (CZE), the team also scored a podium finish in the event at the Red Bull Ring (AUT): Maximilian Götz and Markus Pommer (both GER) drove the #47 Mercedes-AMG GT3 to third place in the second race of the meeting on Sunday. Sebastian Asch and Luca Stolz (both GER) showed great progress from 18thplace on the grid and concluded the rain race in fifth place. Indy Dontje (NED) and Maximilian Buhk (GER), MANN-Filter Team HTP Motorsport, finish in the top ten in the race on Sunday.

Spielberg (Austria)–Sunday’s Mercedes-AMG Motorsport has extended his successful track record in the ADAC GT Masters: after victory in the previous round at Most (CZE), the MANN-FILTER Team HTP Motorsport scored its second podium finish in the third event. Maximilian Götz and Markus Pommer (both GER) drove the Mercedes-AMG GT3 with starting number 47 to third place in the second race on Sunday. The turbulent race at the Red Bull Ring got underway in dry conditions. Five minutes into the race, however, rain set in in Stryria and the race turned into a tyre gamble. Maximilian Götz proved to be unfazed by the outside conditions. The Mercedes-AMG Driver stayed out with slicks and moved up from fifth place on the grid to second. Because of his late pit stop, Götz was even leading the race at the halfway points. After the driver change, Markus Pommer went back out on track with rain tyres and rejoined the race in third place. Like his teammate, Pommer showed a great performance at the wet high-speed track. He overtook one opponent, but as the track dried out, he had to let past one rival who was on slicks just before the end. After 37 laps, Pommer crossed the finish line in third, a little over seven seconds down on the winners.

Sebastian Asch and Luca Stolz showed impressive progress: in the #21 Mercedes-AMG GT3 run by the Zakspeed BKK Mobil Oil Racing team, the duo started the race from 18thplace and worked its way up to fifth position. Thus, Asch/Stolz ended up as the winners in the junior classification.

In the first race on Saturday, the MANN-FILTER Team HTP Motorsport had already scored a top ten result: in dry track conditions, Indy Dontje and Maximilian Buhk drove then #48 Mercedes-AMG GT3 to ninth place, only five seconds down on the winners.

Maximilian Götz, MANN-FILTER Team HTP Motorsport #47: “Prior to the two races, it was clear to me that a lot of things had to fit together for us to make it into the top ten. Fifth place on the grid on Sunday was an enjoyable result. Of course, the rain played in our favour. I was really enjoying myself in the difficult conditions. I also felt well with slicks. The Mercedes-AMG GT3 was outstanding to drive and I was able to get us up to the front. Markus has shown a great performance and even temporarily made up one place. Eventually, he was unable to do anything against the opposition with slicks. We are very happy with third place.”

Markus Pommer, MANN-FILTER Team HTP Motorsport #47: “What Maxi has done with slicks was sensational. During the pit stop, we didn’t want to take any unnecessary risks and we switched to rain tyres. That was the right decision. I felt perfectly at ease with the Mercedes-AMG GT3 and temporarily moved up into second place. The fact that it dried out so much at the end was extremely helpful for the cars on slicks. Of course, being overtaken on the final lap is sad, but there was nothing I could do. We got everything out of the race and we are very happy with third place.”

Luca Stolz, Team Zakspeed BKK Mobil Oil Racing #21: “When making it from 18thon the grid to fifth in such a well-balanced field, you have done quite a few things right. We took a risk with the tyre choice and fortunately, it paid off. From the very beginning, conditions at the fast track weren’t ideal, but we can be happy with fifth place. Winning the junior classification is a nice result.”

Maximilian Buhk, MANN-FILTER Team HTP Motorsport #48: “As expected, we were able to improve over the distance while some of our opponents got into trouble. Once I had overtaken the Audi that was in front of me, I was soon able to close the gap to the next group. The car was really good, but obviously, it is difficult when you are faster at parts where you can’t overtake.”

*excerpt, subject to confirmation by the organiser