Podium goals for Paddon in Finland

Podium goals for Paddon in Finland 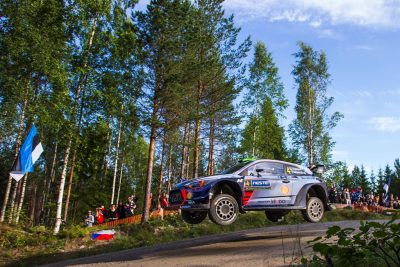 Fighting for a podium finish is what Kiwi rally driver Hayden Paddon and his British co-driver Seb Marshall aim to do as the FIA World Rally Championship heads to the iconic roads of Finland this weekend.

Rally Finland, running 26-29 July, is the one event that Paddon has contested every year since 2010, making it more familiar to him than even rallies at home in New Zealand. Adding to the Hyundai Motorsport crews’ experience, Marshall has contested the Finnish rally seven times, to Paddon’s nine.

“Doing this event for the ninth time makes me feel somewhat old,” says Paddon, “but you can’t underestimate the value of crucial experience on a specialist event like this, so the fact this is the single event I have the most experience of is something I feel very comfortable with.”

Paddon and Marshall arrive in Finland fresh from a hard-fought second place in their Hyundai i20 Coupe WRC at Rally Estonia, 13-15 July, which the pair opted to use to get ready for Finland’s high speed stages, rather than a usual pre-event test

Paddon says: “It was really good preparation – the road surface was maybe a little different but ‘in competition’ testing allowed us to learn a lot and give us some good settings for Finland.

“This weekend the aim, first and foremost, is to try and be ahead of our Hyundai teammates who have been in good form. Beyond that, we know how close this rally is every year between everyone in the top ten. The target is to be setting top five times every stage which should give us a chance to fight amongst the podium come Sunday.”

This year’s Rally Finland has a number of route changes, but Paddon says these are largely new configurations of sections of stages done in previous years. “The rally will still be fast, but narrower than last year, which will suit us and our car better.

“This rally is famous for the jumps and I enjoy the speed and flow of the stages, as well as the atmosphere, which is always a standout.

“Conditions generally look drier and hotter than last year which suits our road position [starting 11th on the road on Friday]. Hopefully, for the first rally this year, we can get a proper advantage from our low start position and use it accordingly.”

Marshall says: “I first did Rally Finland in 2010 and this will be my seventh time competing there, and third in a WRC car. It’s one of the most iconic events of the season; the ultimate rollercoaster on the stages with incredible support from the fans. There’s never a time to take breath and pause in most stages as even the longer straights seem to disappear in no time, so even though the stages maybe short, you’ve got to be on it the whole time!”

Paddon and Marshall – in the #6 Hyundai i20 WRC car – join Hyundai Motorsport team-mates Thierry Neuville and Nicolas Gilsoul, and Andreas Mikkelsen and Anders Jaeger at the eighth round of this year’s WRC.