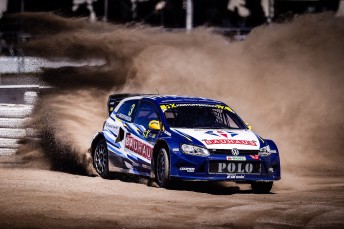 MEDIA RELEASE: Volkswagen RX Sweden’s Johan Kristoffersson delivered a fantastic performance to score a podium finish at the seventh round of the FIA World Rallycross Championship at Trois-Rivieres in Canada (August 7).
Both Volkswagen Polo RX Supercars made it into the final for the second event in a row, in the hands of Kristoffersson and Anton Marklund.
Heavy rain fell just before the final in what had been a hot and sunny weekend in North America and the Swedish pair both took their compulsory joker laps on the first lap, Kristoffersson pushing hard to climb to third while Marklund held off two-time World Champion Petter Solberg in the opening laps.
In conditions that suit both the Volkswagen Polo RX Supercar and Kristoffersson, the Swedish driver chased the first and second placed drivers in the closing stages and almost climbed even higher up the finishing order.
The result marks the third podium for the Volkswagen Polo RX in Canada in three years. Marklund just lost out to Solberg in the battle for sixth after damaging a rear tyre on the circuit and losing time.
Unfortunately, Marklund also suffered from front brake failure after the finish line and was involved in an accident with Solberg.
The result improves Volkswagen RX Sweden’s position in the Teams’ Championship standings and moves Kristoffersson into fourth in the Drivers’ Championship, just three points behind third position. Marklund also climbed the table and is 10th overall.
“We’ve been so close to the podium many times this season and had the pace on a lot of weekends. Now finally it paid off,” said Kristoffersson, who was also fastest overall in Q3.
“This weekend has been really tough. Petter [Solberg] was outstanding in the semi-final but then the rain arrived. I really like the rain and our car is really good in the rain.
“In the first two laps of the final I was very, very quick and was catching the guys in front. I felt like I was so close to be higher on the podium but it feels really great to finally be here.
“Now I’m really looking forward to the rest of the season.”
Marklund qualified ninth at the Intermediate Classification and delivered an impeccable performance in semi-final one to qualify for the final.
“I pushed really hard in the semi-final, the pace was really there and we set some great lap times,” said Marklund.
“It was nice to have the pace to come through to the final from the last row in the semis, like at Holjes.
“Hopefully next time I will qualify for the front row and make life a bit easier. In the final we put rain tyres on with a dry setup. I touched a wall on lap one, which damaged my left rear tyre.
“I was struggling a lot, I tired to keep Petter behind but on the last lap he managed to get passed me.
“Unfortunately when I was braking after the finish line I had a front brake failure, the car locked up at the rear and I slide into Petter.
“I’m fine, I just have some sore muscles and I really wish Petter all the best.”
Volkswagen RX Sweden Team Principal Michael Schneider was delighted that the hard work by the whole team this season was rewarded with a podium in Canada, and is looking forward to continuing the second half of the season at the next round of World RX at Loheac in France next month (September 3 – 4).
“It was a great second day of the event for both Johan and Anton. Johan had a great drive in Q3 by setting the fastest time; he confirmed that we have the pace,”said Schneider.
“It was very tricky to make the right decision with the changing conditions before the final but we made the right one and we’re very happy to be on the podium, I hope we can continue this through the second half of the season.
“Anton did a really great drive in the semi-final to make it to the final. It’s very unfortunate what happened after the finish line and all of us wish Petter all the best.”