Podium for the Porsche 911 RSR in IMSA, North America

Podium for the Porsche 911 RSR in IMSA, North America 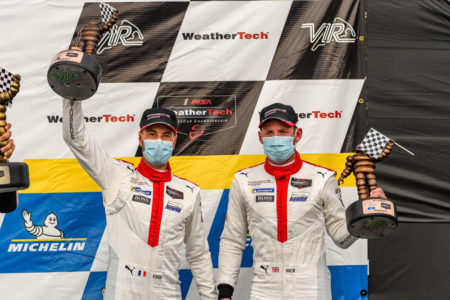 The Porsche GT Team has concluded round five of this season’s IMSA WeatherTech SportsCar Championship on positions three and five. In an eventful race at the Virginia International Raceway in the east of the USA, Britain’s Nick Tandy and his French teammate Frédéric Makowiecki scored a podium result instead of the deserved victory in their No. 911 racing car. Bad luck plagued the sister car of reigning champions Earl Bamber from New Zealand and Laurens Vanthoor from Belgium. Midway through the race, a damaged diffuser threw them far down the field. The No. 912 car took the flag in the GTLM class in fifth. As at the previous two races, the 2019-generation Porsche 911 RSR was the fastest vehicle in the fierce GTLM-class competition among manufacturers. Once again, however, fortune did not shine on the North American factory squad. In the GTD category, the Porsche 911 GT3 R fielded by the customer squad Wright Motorsports finished on sixth.

While in the lead, a puncture saw polesitter Frédéric Makowiecki pit early after just eleven laps. As part of a safety car phase, the No. 911 managed to work its way back up the order to the front and pull clear. However, the gap of up to 18 seconds was not enough to secure the long-awaited maiden victory for the new Porsche 911 RSR in the USA. Shortly before the end of the 2:40-hour race, the vehicle sustained another tyre puncture. The pit stop for repairs threw Tandy back to third place. In a last-ditch effort over the final laps, the British racer turned the fastest lap of the race in 1:41.333 minutes, but was unable to make any significant progress to the top.

While in the lead, the ca. 515-hp works cars from Weissach were able to pull clear of the field several times. Thanks to their incredible consistency at the highest level, both vehicles were good for victory, however the No. 912 car driven by defending GTLM-class champions Bamber and Vanthoor was hampered by bad luck. During a fierce duel with a BMW, the diffuser at the rear sustained damage at the restart after a safety car phase. The ensuing repairs over two pit stops threw the vehicle three laps down the field. Under the conditions, fifth place was the best possible result.

In the manufacturer’s classification, Porsche heads to round six of the season at Road Atlanta of 6 September ranking third. In the driver’s classification, Bamber and Vanthoor retain second place. Their team colleagues Makowiecki and Tandy have advanced to position four.

In the GTD class for vehicle complying with the FIA GT3 regulations, the Porsche 911 GT3 R fielded by the Wright Motorsports customer team achieved sixth place. The American factory pilot Patrick Long and his compatriot Ryan Hardwick put in an impressive charge in the 500+hp car with the starting number 16. After taking up the race from the twelfth grid spot, the pair steadily worked their way through the field over the course of the race. The team ranks sixth in the overall standings.

Comments on the race
Steffen Höllwarth (Head of Operations IMSA Championship): “Both cars started the race from the first grid row, we were leading with both vehicles and ultimately finished on third and fifth. That’s bitterly disappointing. Two punctures on our number 911 car, extensive repairs on 912 – that was the end of our winning chances. Our pace was great, and the team worked perfectly. For the upcoming race at Road Atlanta we want to finally get through a race without hiccups and claim the first win of the year with the new Porsche 911 RSR.”

Frédéric Makowiecki (Porsche 911 RSR #911): “I’m absolutely gutted. To be honest, this third place is the saddest podium of my career. We were so strong this weekend. In fact, our team dominated the weekend. It’s just terrible that third was the best we could do. This result is so unjust for the team, the car and us drivers. And it also makes me sad that we’re falling further and further down the rankings in the championship. We really don’t deserve that.”

Nick Tandy (Porsche 911 RSR #911): “Our car was truly perfect and the team did a flawless job. We can be proud of that. If you can make it to the podium against such tough competition despite two punctures, then that’s a good indication of the strength. And that’s precisely what makes me optimistic for the future.”

Laurens Vanthoor (Porsche 911 RSR #912): “I’m utterly frustrated. Our unlucky streak just doesn’t end. During the last three races, we were on course to win only to be robbed of the fruits of our hard work. Something always crops up. The team worked perfectly, our car was ultra fast and the drivers tapped the full potential. Sadly, there was an unlucky contact which damaged the rear. Now we’re looking ahead. At some point, we’ll be on the sunny side again.”

Earl Bamber (Porsche 911 RSR #912): “We were looking good in the race and our pace was really strong. Then suddenly a BMW drove into the rear of my car after the restart. The diffuser was so badly damaged that the entire rear section had to be replaced. That threw us so far back that we lost all contact to the lead. It’s just sad because we really deserved to win today.”