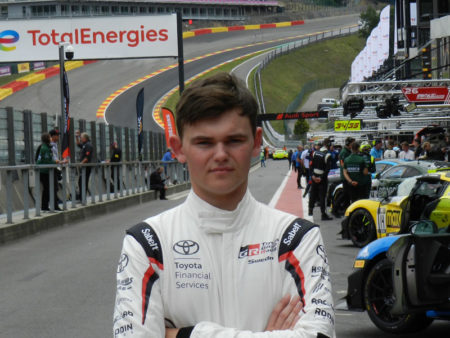 Christchurch’s Harry McDonald has finished on the podium with co-driver Tommy Gråberg on debut in the GT4 Scandinavia Series at the Spa Francochamps circuit in Belgium.

Competing in the Pro-Am category, McDonald and Gråberg are part of a two-car Toyota Gazoo Racing team from Sweden driving Toyota GR Supra GT4s, with their sister car, driven by Hans Holmlund and co-driver Emil Skärås, winning the round.

“As I expected racing in Europe is full on aggressive and always on the limit, the top Pro drivers are just next level fast,” McDonald said.

“The Spa circuit is intense with 7kms of high-speed corners.

“It’s a track that takes commitment and confidence with the car.

“We take Radillion at over 200kph and it’s a totally blind corner.”

McDonald was literally thrown in the deep end with the team collecting the brand-new GR Supra GT4 less than a week before the event and then completing only 20-laps before qualifying.

“The Toyota Supra GT4 is a weapon of a race car,” McDonald said.

“It’s engineered smart by Toyota Gazoo Tacing, a very balanced and forgiving car with terrific top speed, even under the balance of power rules.”

The GT4 Scandinavia round in Belgium saw two races, one on Friday evening and the second on Saturday morning, before the 24 Hours of Spa race.

Having finished fourth in Class on Friday evening, McDonald and Gråbergheld stepped onto the podium in second place on Saturday.

“A podium finish with Toyota Gazoo Racing was not what any of us expected for this weekend in both a brand-new car and a new track for me along with the largest GT4 entry list ever,” McDonald said.

“We achieved less than 20 clear flying laps prior to Race 1, but with two long races and more seat time I gained confidence in both the car and myself.

“Tommy (Gråberg) and I were rewarded with second and a Toyota 1-2 for the Scandinavian GT4 championships.”

The GT4 Scandinavia is a motor racing series for GT4 Grand Tourismo, based on a two-driver concept meaning that an amateur and a professional share a car and drive the same amount of time in both qualifiers and races, with two separate classes – Pro/Am and Am.

The competition format in follows other championships for the same category of cars.

A competition weekend begins with an hour-long test session and is then followed by Qualifying (two ×15 minutes).

The race is between 50 -60 minutes long, including a mandatory pit stop for driver change.

McDonald now prepares for the next round in Sweden at the Scandinavian Raceway Anderstorp on September 10-11, before the final round in Gellerasen.