Podium for Crick in Trans Am debut

Podium for Crick in Trans Am debut 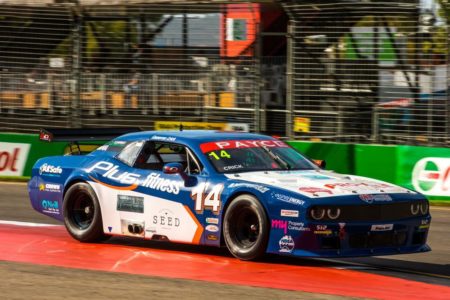 Camden-based racer Cameron Crick has enjoyed a podium finish in an exciting opening to the 2020 Trans Am Racing season on the streets of Adelaide.

The Trans Am series is set for its biggest year ever, following a great showing as a support category for round one of the Supercars Championship, with a strong field of competitors making the category must-see action in 2020.

Crick entered the weekend with minimal experience behind the wheel of his Dodge Challenger, however was quickly amongst the front runners in both practice sessions, before qualifying 3rd.

“I think it was a great result. We had some gearbox issues in practice which took time to sort out and then, unfortunately, my good mate Craig Dontas decided to entertain his home crowd with a big spin and unfortunately got cleaned up by George (Miedecke) who had nowhere to go! This obviously shortened our qualifying but the main thing was that those two guys were alright and managed to get back out on the track”

Crick started Race One with optimism, however his hopes to challenge for the top step were quickly dashed when Miedecke’s car pulled up lame suddenly through a corner on Lap 1. The hard-charging Crick was close to his rear and the resulting collision left his #14 entry with some heavy damage to its left side, ending the race in 17th after a trip to the pits.

Crick put his disappointment behind him in Race Two with a surge from 17th to 6th, pushing his Dodge Challenger through the challenging Adelaide Circuit whilst showing off the sort of race-craft that has been on display since Crick burst onto the Australian Motorsport scene in 2015.

Starting back near the front of the field in Race 3, Crick did not allow his hard work to go to waste, racing with control and composure to dice with several other drivers at the top of the time sheets. His hard work would pay off with a podium finish – a great result considering the mishaps of Race One and the fact that Crick was making his debut on one of the most unforgiving race tracks in the country.

Crick was pleased with the efforts of his team in the new category, and spoke highly of the Superloop event.

“I always love Adelaide – it’s a mega event and the crowd and city really come alive. It was great to bring some of our partners along and entertain them and have a bit of success in our first competitive outing was really rewarding. We can’t wait to get back out on the track!”

Crick was also full of praise for his long-time Toyota 86 rival and 2019 TA2 Champion Aaron Seton.

“Congratulations to Aaron (Seton) for giving us all the broom and sweeping the weekend! He’s a great talent and you saw last year how competitive he is in this category. He’ll be tough to dislodge at the top but we’ll be giving it our best.”

The Trans Am Series moves to Sydney Motorsport Park for Round Two on March 27th.