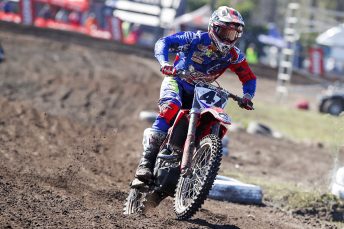 Crankt Protein Honda Racing’s Todd Waters capped off the 2017 MX Nationals season with a well-earned runner-up result at Coolum Pines MX Track’s final round of the championship in Queensland today.

Waters rode his CRF450R to second position in both races on Sunday after charging to the front of the field and leading much of the opening encounter. He was also able to challenge for the victory in another exceptional performance during moto two later in the afternoon.

It was a rewarding way to round out the championship for Waters and the factory-supported Crankt Protein Honda Racing organisation, sealing fourth in the final championship standings as a result, with a number of podiums to their credit and a strong end to the campaign.

Coolum wasn’t kind to teammate Luke Clout after he lodged a pair of non-finishes this afternoon, however he had once again displayed top five pace prior to his unfortunate exit during the motos. Despite the disappointment, he was able to capture P8 in the points tally at season’s end and best of the MX1 rookies.

The Crankt Protein Honda Racing team will now turn its attention to Jimboomba’s opening round of the 2017 Australian Supercross Championship on 23 September in Queensland.