Podium finish for Haber in Europe

Podium finish for Haber in Europe 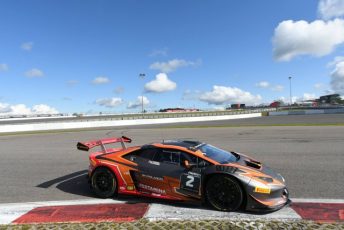 Morgan Haber’s European assault in the Super Trofeo Series hit a high on the weekend at the world renowned Nurburgring in Germany as he claimed his first podium finish in race 1.

Having transitioned from the Australian GT Series to a full time drive in 2017 with the German racing team, Leipert Motorsport, Morgan is enjoying the challenge of a new car and also racing on some of the best tracks in the world. “The Lamborghini is quite different to the other cars I’ve raced – it has more power, but less aero than the other GT3’s. I’m really enjoying racing in the Super Trofeo Series as it attracts some of the best drivers from around the world meaning it’s really competitive!!”

It hasn’t taken the 23 year old long to come to grips with the Lamborghini, finishing P2 in the first practice session and clocking the quickest lap time in the wet. Morgan’s qualifying session on Saturday saw multiple red flags, which made it hard to put together a clean lap, resulting in a P12 finish.

Morgan started race 1 on Saturday afternoon and didn’t waste time moving up to 6 th position before pitting and handing over to his co- river, Jan Kisiel. The polish driver continued to move forward and by the end of the 50 minute race, Haber and Kisiel crossed the line 3 rd and secured their first podium in their inaugural year in the Lamborghini.

Race 2 on Sunday saw a wet track and with the #2 Leipert Motorsport Lamborghini starting in P6, Kisiel was behind the wheel. Slippery conditions but a drying track saw multiple cars struggling for traction, but Kisiel held position and handed the car to Haber still in P6. Haber having set the fastest time in the wet took to the track and quickly started reducing the lead of the top 5 cars. Sitting in P5 and setting some quick lap times, Haber was turned by a backmarker at turn 1, pushing the Australian back to 12 th . He quickly recovered and continued to make his way back towards the front of the field, but with time against him, Haber managed to cross the finish line in P6.

“It was great to have my first podium finish in Europe and with 1 round left in Imola, I think we have a strong chance to be on the podium there too”.

The World Final in Imola, Italy will take place on the 16 th – 19 th November with all races live streamed via the Super Trofeo website.