Podium finish for Young and Cusco Team in Malaysia

Podium finish for Young and Cusco Team in Malaysia 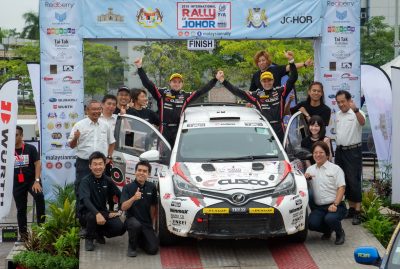 The Malaysian Rally with its heat and humidity is always one of the toughest events of the year. Hard on the car, and on myself and Malcolm (Read) as temperatures inside the car can reach 50+ degrees C. This year proved to be no different with hot humid conditions all weekend. Luckily rain that fell earlier in the week, held off until the last 5 kilometres of the last stage. Thank goodness!

We were always going into the unknown with this rally – how was the Cusco Toyota Vitz going to handle the heat. It was the perfect test for the car, three 25km plus stages to start Day One. We lost time at about the 15km mark in each stage as the engine temperature started to get quite high and we lost power. That mixed with overheating and soft brakes made for an interesting morning. Sadly 2m 40secs was lost in the process.

The afternoon was much better. The Cusco mechanics made some adjustments at midday service and the car felt good. The first two stages went well with little overheating problems, we were only 2 seconds behind our team mate (Yuya Sumiyama in a Skoda Fabia R5) in the monster 31km stage four. We were able to reduce the time loss 3 minutes off the lead – 2nd overall at the end of day 1 was satisfying in a rally we just needed to finish.

Sunday and Day 2, we decided on mud tyres all round. A good choice as the first two stages of the morning were very damp under the trees. We were 8 seconds off rally leader Sumiyama on SS7 and then won SS8 by over 15 seconds – the Toyota Vitz’s first stage win!! There was all kinds of drama on the next stage when Sumi-san lost over 2-minutes after getting stuck in a ditch. The fight was on, we were now just 1 minute off the lead. Could we make it a win?

We tried our best in the afternoon, taking another stage win but not enough to gain on Sumiyama in the Cusco Skoda R5. More over-heating problems put an end to the fight but a much needed 2nd place and a 1-2 for Cusco Racing.

After all the hard work the team has put in, it was great to get a good result for Cusco and TRD, the first finish for the Toyota Vitz and on the toughest event of the season – second place feels like a win!! It was a belated 30th birthday present for Malcolm too, our first international podium since WRC Australia last year!

Overall a good driving performance and now we can look forward to Cusco’s home event in Japan, the Rally Hokkaido with some confidence. In the mean time Cusco and TRD will make some modifications to the car to fix the overheating problems and to protect the front radiator better.

Until next time.
Mike
www.mikeyoung.co.nz