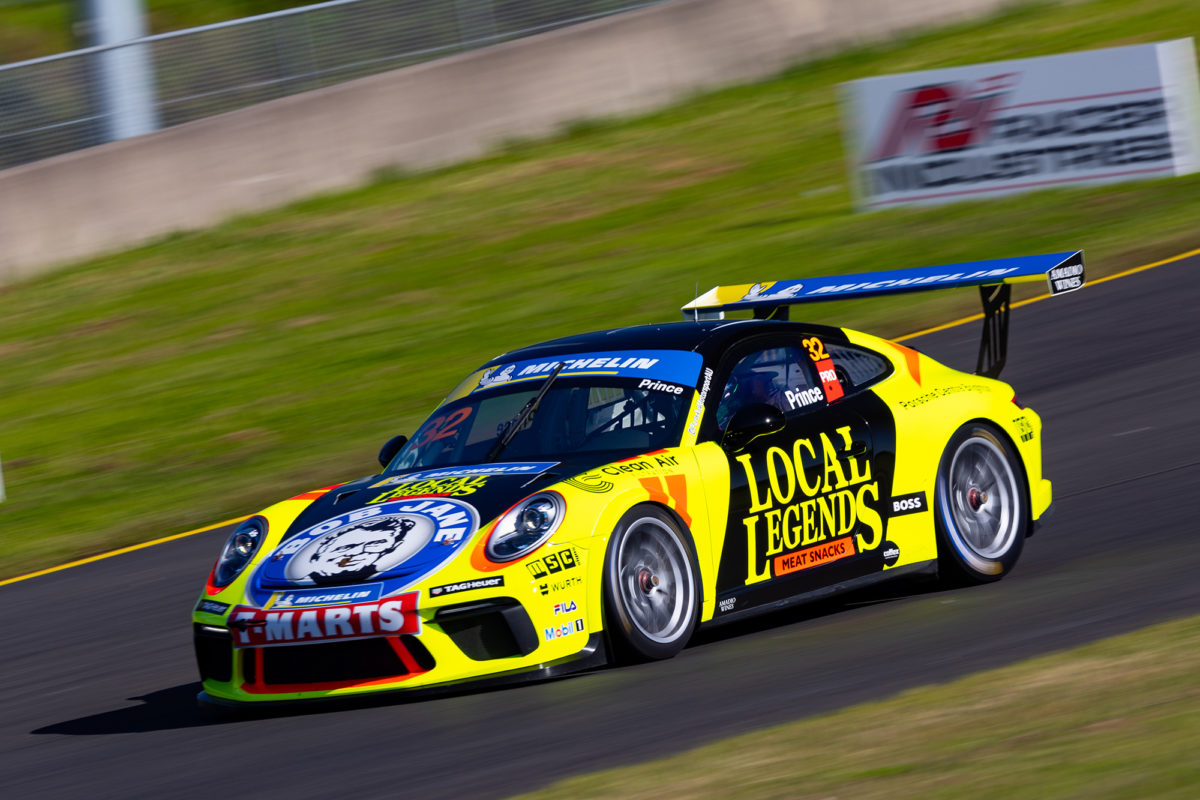 Prince was a standout at Sydney Motorsport Park as she finished with a clean-sweep of podiums to sit third in the standings.

In each race, Prince made perfect starts to challenge leading contenders Thomas Sargent and Ryan Wood in the Local Legends/Bob Jane T-Marts entry.

Although she wasn’t able to hold onto second by the finish, she was considerably quicker than the chasing pack to maintain third in each.

Making his debut in the storied Bob Jane T-Marts livery, Goodman made a steady debut in the Porsche Michelin Sprint Challenge following the familiar pathway through Sonic from the Australian Formula Ford Series.

Qualifying 10th, Goodman finished with a pair of sevenths in the opening two races, which included a 27-lap mini-enduro.

A tardy start in Race 3 led to Goodman taking avoiding action as a backmarker spun damaging his Porsche as he cut through the in-field to finish 22nd.

After an incident during practice, Williams was on the backfoot as he produced a strong recovery drive to finish sixth in the Pro-Am standings.

Seventh in Race 2 was backed up by the same position in the final event to finish the round sixth.

“Overall a good, positive weekend finishing third outright and to start the season with a big bag of points,” said Prince.

“We kept improving our times and we were with the frontrunners so we are getting closer to where we want to be.

“I want to give a massive shoutout to Mick and the Sonic crew for their hard work, with me as well as the car. I’d also like to thank all my supporters including Local Legends, Bob Jane T-Marts, MSC Signs and Porsche Centre Brighton.

“Phillip Island should be awesome, it’s one of my favourite tracks and we scored a podium there last year at my first event, so I’m pretty keen to get back there.”

“It was a good weekend, lots of learning and the improvements were positive,” said Goodman.

“Doing only three test days before the opening round made it fast paced into the weekend, but I made lots of improvements, which was good.

“It was fun qualifying at night and the two races I ended by myself in both, but I was progressing and just working on everything through those. The final race I made a mistake at the start then got caught up in some other incidents, which resulted in damage and I struggled from there.

“Overall, it was a good learning weekend and I’m looking forward to Phillip Island.”

“It’s been a great weekend, I’ve been out of the car for a long time and got a couple of test days with the Sonic crew,” Williams said.

“I got to spend a fair bit of time with Mick beforehand, which was really nice.

“The weekend didn’t start off great with a shunt at Turn 2, but the Sonic crew put the car back together very quickly as we just missed second practice. In qualifying, we were reasonable before the races yesterday were good and today went well.

“It’s always a pleasure working with the Sonic team and I have to give a shoutout to my teammate Courtney for her podium results. She works so hard and deserves anything she gets.”