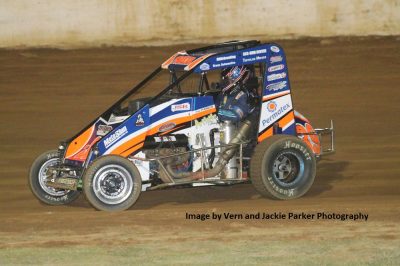 After a rainout on the original date a few weeks ago, Redline Raceway this Saturday night finally honours another of the legendary names from the Mount Buninyong dirt tracks history with the first running of the Bill Evans Classic for Speedcars having received great support from the venue and the local Victorian Speedcar Club in attracting a great field of competitors nominated to do battle.

The Speedcar drivers are in for a treat if the weather remains overcast and lap records could be shattered as we have seen all season. The Bill Evans Classic honours a man that became connected with what was then known as Torana Park in the 1960s promoting what was on a typical night a Solo Bikes, Sidecar, Speedcar, Super Modified and Sedans.

Bill is best known for the Southern 500 for Sedans back in the day and the Fireball Derby; the latter still is competed for by the modern day Sprintcars in the Sprintcar Racing Association.

Nominations for this Saturday nights Speedcar racing includes last week’s Wangaratta winner Travis Mills and the runner Nick Parker who both put on a sensational show last weekend, Dhillon Ghent the Rookie sensation who was also in good form and won a big feature at Avalon recently is also in the mix.

Norm Moore from South Australia comes across to do battle, Andy Pearce, Justin McMinn, Anthony Chaffey, , Joe Lostich, Nick Parker and Troy Jordan are just some of the twenty plus drivers in the field who will set sights on being the first Bill Evans Classic winner as the pocket rockets fly around the fast Redline Raceway.

Another class that are consider pocket rockets in their own rights is the Grand Prix Midgets and the field for the latest Victorian Ballistic Performance Parts series round includes Victorian Champion Danny Stainer, former champion Jason Crawford and hard chargers Travis Florimell, Lisa Chalcraft and Chris Fowler. Due to the recent rain out, the field is missing some drivers who have elected to compete in the Australian title that is running the same night due to their own re-scheduled meeting up in NSW.

Interest in the Thunder Sedans is sky high this weekend with the local boys inviting the Unlimited Sedans to come and compete with them. As a result seventeen cars will go head to head with the Thunder boys keen to defend their honour on their home track with Anthony Wilson making a comeback in his recently sold race car to help Steve Hodder, Mick Rizzoli and other locals against a strong Unlimited contingent that includes their top three from the recent Victorian title led by Warrick Taylor, Sean Lister and Darren Nelson.

The racing will be terrific and you can beat the celebrations will be even bigger for whichever group comes out with the race win!

Street Stocks, Standard Saloons, Sports Sedans and V8 Wingless Sprints all fill up a packed program on Saturday night; you will sure get your dollars worth! Gates open at 2pm racing begins at 5.00pm, prices for this meeting are adults $20- Aged & Disabled Pensioner $15, kids 5 to 15 years of age al at $5 each, whilst under 6 years of age is free & a family of 2 adults and 3 kids at paying age, $50-. Contact for information 0418 399 917