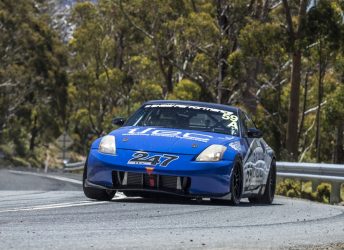 Launceston’s Adam Garwood and Reubecca Sheldrick have won the tarmac rally title at the fourth annual Poatina Mountain Race, presented by Buckby Motors. While in the Stuart Benson Petrusma Property, driver-only hillclimb competition, Hobart’s Stephen Noble, has taken victory in the Contemporary category, and Damien Moore, also of Hobart, was fastest in the Heritage category.

Finishing 34.6 seconds behind the winning pair on total time was Ben Manion and Mary Hughes, also of Launceston, in a turbocharged two-wheel drive Nissan Skyline. Rounding out the top three was Robbie Maher and Golly Roberts in a Mazda RX-7, a further 24 seconds behind.

“The car was really strong,” says Adam. “This was the first event together for Bec and I, and everything just went to plan.

“This is my second win at the event, last time was 2015 in a Porsche 911 GT3, and I just can’t get enough, it’s one of the best roads in Australia,” says Adam, who competes in the national Touring Car Masters Championship and in recent weeks has tested a V8 powered Nissan Altima Supercar at Winton Raceway.

For the second year in a row podium positions for second and third were not clear until the final stages of the day, with Hobart’s Peter O’Keefe and Julie Winton-Monet (Mazda RX-7 SP) withdrawing with fuel pump concerns. O’Keefe had been constantly recording times within a narrow margin to both Manion and Maher.

Producing stage times that were inline the rally, but without the benefit of a navigator, was Hobart-based Stephen Noble. Driving a turbocharged Nissan 350Z in the hillclimb category for vehicles produced after 1985, Noble was consistently quickest and improved further as afternoon weather crept towards a peak of 27 degrees. Fasted of the cars produced prior to 1986 was defending hillclimb champion Damien Moore and his Ford Escort Mk II, which is powered by a MoTeC equipped and turbocharged Ford Zetec engine.

“The fourth annual running of the Poatina Mountain Race was without a doubt the best yet” said Event Director Stuart Benson.

“This event enjoys excellent support from the local community and discussions are already under way about an exciting expansion in 2018 ”.