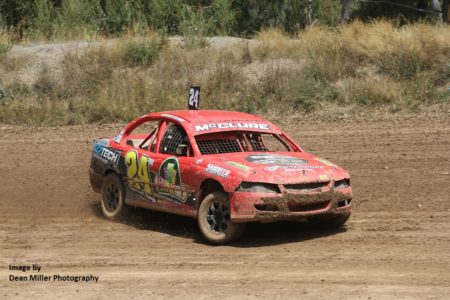 Another large crowd at Daylesford Speedway attended the third meeting of the season and were treated to lots of variety with some new categories attending that have not ever been to Daylesford or had not been for many years, a poplar winner was Brad McClure and young Blake Harris, whilst many of the local top drivers continued their winning ways.

A couple of huge crashes during the day added some extra excitement and a million heartbeats as Daniel Litten rolled over in the Daylesford Mods after hitting the turn four embankment and later in the day young Junior Sedan racer Ben Carrington hit the same embankment and forgot to take his foot off the accelerator as he went flying over the embankment and into the maintenance equipment area 15 feet below the embankment up against a tree. All drivers walked away with a tick from the Paramedics.

Into the race results and the Daylesford Modified Sedans had some returning and new drivers in the class for Sunday’s racing and Jaidyn Dredge who recently was the star of the show at the Caravan Race, won the first heat whilst Blake Harris in his first adult race meeting after ending his Junior Sedan career won the second. In the final Dredge and Harris both put in terrific racing as they worked their way through the field through fifteen laps. Popular with the veterans of the club Harris took the in from Ryan Daly, Steve Warlond, Brett Carrington, and Daniel East.

Brad McClure who is a legend of Street Stock racing is winding down his career and is trying to reach as many tracks as he can before his car moves to a new owner picked up a membership to help support the Daylesford club and then went about winning much to the pleasure of the crowd watching him end his career. McClure won both heat races before then winning the final in front of Ellen Vagg another new member at Daylesford, Chris Hay, Des Robinson, and Glenn McCoubrie. A rousing standing ovation was given to McClure on his victory lap by everybody that witnessed his win.

The Kakoschke Boys in the Junior Sedans Bailey and Reece both took a win each in heat racing before Reece took the feature race win. The boys were challenged by Jhett Cruize, however in the end they prevailed with Reece Kakoschke, Bailey Kakoschke, Cruize, Blair Botheras and Blaize Majok-Edwards the top five finishers.

Rickylee Baston the top gun in Ladies Sedans won all three races on the day, the two heats and the final in the Roz Moynihan Memorial qualifier. Basten defeated Jane Laidler, Rachel Robinson, Richelle Jenner and Renah Pollard in the final for the day.

Visiting Division 2 Hot Rods from the Victorian Speedway Council had not completed for at least a very long time at Daylesford, perhaps never. Jason Seymour and Daniel Angus won the two heat race events before Troy Hutchison got the better of Daniel Angus in the final winning from Mel Tatterson, Scott Angus and Jamie Angus with the race declared by stewards after a race incident.

Sports Sedans a now regular class at Daylesford with members in competing cars also had a run and Daniel Angus from the Division 2 Hot Rods raced in his brother Scott’s car and won the two heats and the final. Angus defeated Troy Glassborow, Ian Bartlett, Jason Andreatta and Dean Pederson.

Unlimited Sedans had some big, loud, and fast competitors however a few cars were banged up in heat racing and took away from what could have been. Warrick Taylor after winning both the heat races elected to start a small distance behind the others in the field and Darren Nelson from Werribee would go on to take the feature race win from Taylor and Anthony McKean.

The Standard Saloons unfortunately were unable to fit their feature race in due to time constraints. On points the win was awarded to Matt Reddecliffe from Justin Hutchins, Matt Domburg, Tim Hutchinson, and Ash Dean.

Visiting Modified Sedans also missed out on their final due to the time constraints. Dale Hallett, John Dike and Darcy Wilson were the top three.

Daylesford Speedway is on again in March with racing on the 13th and 14th.