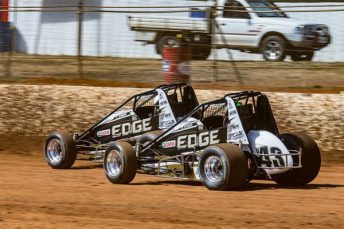 The Storer Motorsport team was pleased with their efforts in last weekend’s 2017 Australian Wingless Sprint Championship at Carrick Speedway in Tasmania, with the Storer brothers, Daniel and Luke, achieving fourth and 11th-place finishes respectively.

In what was his fourth Australian Championship attempt since joining the Wingless Sprint class, Daniel was able to improve on his form in the final night of competition, which saw him sitting 11th in points after night one, lining up in sixth place for the 35-lap Australian Championship deciding feature race, by virtue of a second and third-place finish in his remaining two heat races.

Working his way up to fifth in the middle stages of the Australian Championship feature race, Daniel continued to make up ground on fourth-placed and fellow Victorian Glenn Watts, eventually managing to down him with six laps to go and going on to retain his position to impressively finish just one spot shy of the podium in fourth.

Having stepped up as a driver in his second season with the class, Luke was in solid form throughout the Australian Championship, despite facing adversity a number of times during the event. Coming away with two second-place finishes in his opening night heat races, misfortune struck for Luke in the preliminary feature race, which he had started from position four, after contact with another competitor on the opening lap resulted in his left-hand side nerf bar being ripped off, causing him to be mechanically black flagged.

Sixth in points heading into the second and final night and finishing fifth in his penultimate heat race, Luke’s misfortune continued in his final heat race, when he was plagued by a mechanical issue which forced him to retire to the infield, affecting his points and placing him out of position 14 for the Australian Championship deciding feature race.

Having made his way up to 10th by the middle stages of the feature race, Luke was in good stead to come away with a top-10 finish, but was unfortunately unable to hold off a late-race charge from outgoing Australian Champion Daniel Hartigan with six laps to go, forcing him to finish just outside of the top 10 in 11th.

“I can take a lot more positives than negatives away from the weekend and to qualify into the feature race was an achievement in itself,” commented Luke Storer.

“It’s difficult to not think about what might’ve been in feature race had I not dropped my final heat race and been able to start further up in the field; however, that’s the way things go and I’m still very happy with how the weekend went.”

For their next appearance, the Storer brothers will take to their home track – Portland’s Southern 500 Speedway – for this Saturday night’s fifth Super Series round.

To find out more about the Storer brothers and their team, LIKE them on Facebook by searching Storer Motorsport.