Pirelli’s Grip on 2017 ASBK title fight ahead of Round 6: According to Steve Martin

Pirelli’s Grip on 2017 ASBK title fight ahead of Round 6: According to Steve Martin 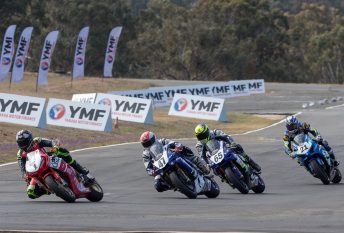 Martin shared; “For me, Sydney Motorsport Park holds plenty of fond memories. Best of all was winning my Australian Superbike Championship there back in 1999, on a Ducati 996. I got pole position and two race wins that weekend and that was the last Australian Superbike race that I competed in. It’s definitely a track I look forward to visiting every year.

“Obviously, the title fight is getting very serious now, with only two rounds remaining,” according to Martin. “Sydney Motorsport Park is completely different to the last round at Queensland’s Morgan Park Raceway, with much faster speeds attainable. The track has a lot of history, including playing host to Grand Prix events back in the 90’s. Although it’s a fast and flowing track, it can still bite you if you make a mistake. Setup is absolutely critical at this circuit, a bike that turns well around this track will provide a huge advantage. Having said that, brakes also have to be strong to make up time in the corners.

“Maxwell’s charge through the pack at Morgan Park Raceway was sensational, although he could put himself in an even better position if he can improve his qualifying and starts,” Martin said. “The Yamaha rider (Maxwell) may have been able to charge through the field, but you can’t do that in every race. The more you push through the field, it leaves you open to mid-pack collisions and incidents. The Yamaha YZF-R1 is really dialled in at the moment, but you have to qualify on the front row to give yourself the best possible chance of winning. I’m sure Yamaha and Maxwell will be able to rectify those starts.

“This is without a doubt one of the most exciting championships I’ve ever witnessed in ASBK,” exclaimed Martin. “There have been more twists and turns than the Great Ocean Road and you only have to look back at Round 4 Hidden Valley Raceway when Maxwell crashed out and it almost looked like his title chances were over. In reality, there are probably still five riders that still all have a shot at the title. I would also not be surprised if young gun Corey Turner collects a win before the year is out.

“Over in the Motul Supersport class, I don’t know what Ted Collins (NextGen Motorsports, GSXR-600) has been drinking down in Warrnambool,” Martin quipped. “Collins has got serious talent and you get the feeling that he will have a special career in front of him.

“There are too many upcoming stars in the Hi-Tec Batteries Supersport 300 class to name. Several riders caught my eye at Round 5 in Morgan Park, including Billy Van Eerde (KTM Australia, KTM RC 390), Jack Mahaffy (JDS Moto, Yamaha YZF-R3) and Tom Bramich (Ron Angel, Yamaha YZF-R3) just to name a few. The winner in the 300’s is the class itself. The way the class is producing such excellent races and overtakes, makes it arguably the most action packed every race weekend,”

“It’s clearly evident that this year has belonged to Pirelli tyres, winning the fair majority of races in multiple classes,” Martin explained. “Link International has really put together a strong operation at each of the ASBK rounds, and the results are a by-product of that investment. Pirelli’s development in the World Superbike Championship would also be a contributing factor.” Martin finished.

Pirelli Product Manager, Garry Crilly shared his predictions ahead of Round 6; “The Superbikes will be out on SC1’s and SC2’s at Eastern Creek this weekend. Those tyre compounds have been proven to do well at the circuit, but the SC2’s will most likely be the Superbike rider’s choice, as they offer a more rigid structure that can handle the higher corner entry and exit speeds at SMSP. However, some will go for the extreme grip of the softer SC1’s that they have been running at most other tracks this year.

“The weather is looking like it will be dry, but its Sydney and anything can happen, so we will be taking a whole stack of wet weather rubber too. All in all, approximately 500 sets of tyres are on board the Pirelli truck to cover each class that will be racing at the ASBK, right from the premier Superbikes to the smaller 300cc classes.” Crilly finished.

Can’t make it to the track? Then make sure you watch the ASBK, this Sunday on channel SBS at 1pm AEST or Live Stream from 9:30am on asbk.com.au.