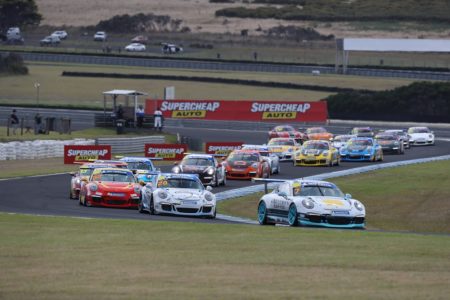 After a 16-month break, twenty Porsche Michelin Sprint Challenge 91 GT3 Cup cars lined-up for Race 1 of the 2021 season. Overcast, breezy conditions had replaced the sunshine and blue skies of Friday’s qualifying. While the asphalt for Saturday’s opening sprint race would be dry, a huge rain front was on the weather radar for later in the day.

Matthew Belford had also made a strong start from tenth on the grid, jumping three spots into second in the Morris Finance Pro-Am class. Belford was closely followed by David Greig, Marcel Zalloua and Sergio Pires for the opening laps.

Suhle quickly amassed a 2.2 sec lead at the front of the field, while Pires and Tom Taplin dropped down the order after early off-track incidents. After Christian Pancione and Callum Hedge caught and passed Shahin, attention then switched to the battle between Hall and Prince for second position.

Hall and Prince were locked in battle for the entire race holding their podium positions to the line. They were followed home by Pancione in fourth and a recovering Hedge in fifth. Despite a small lock-up toward the end of the race, Suhle looked unfazed and controlled the gap to the chasing pack throughout the race. The McElrea Racing driver eventually crossed the line 1.6secs ahead of his teammate, Hall.

Shahin meanwhile would grow his advantage over the Morris Finance Pro-Am throughout the race and cross the line first in the class. Behind Shahin great racing had ensued throughout the field between Matthew Belford, David Greig and Marcel Zalloua. Michael Hovey and Shane Barwood too were locked in an intense battle further down the order, until Barwood spun late in the race, allowing Hovey to come home in 14th.

As predicted a huge rain front hit the Phillip Island Grand Prix Circuit around midday, forcing the officials to declare a wet race for the second sprint race. The sodden conditions saw the field start behind the pace car as a precaution. Suhle would jump the field at the restart and pull out a 2.5 sec lead by the end of the first lap. The McElrea Racing driver then set the fastest lap of the race – nearly 4 seconds faster than his nearest rival at that point- until spinning under brakes at the turn 3 hairpin. On the same lap, Shahin would ironically also spin at the same corner dropping him down the order to 13th overall.

With Suhle and Shahin started their recoveries through the rain and field, Courtney Prince seized the opportunity for the overall lead at the front of the field, overtaking Bayley Hall. The Team Porsche New Zealand entry of Callum Hedge was on the move however and would catch the pair, setting the second fastest lap of the race.

After overtaking both Hall and Prince, the young Team Porsche New Zealand driver would tenaciously hold onto that lead for the remainder of the incident marred race, giving the Earl Bamber Motorsport team their first race victory in the Porsche Michelin Sprint Challenge Series on debut.

After an impressive drive, Prince would spin late in the second race and eventually finish the race in fifth. Bayley Hall’s equally impressive weekend would come to an unfortunate end in the dying laps due after making contact with a recovering Shane Barwood on the main straight. Hall was lying a strong third in Mobil Pro class until that point. Unfortunately the damage sustained in the incident, saw both Hall and Barwood’s cars retired for the weekend, but thankfully neither driver was hurt in the incident.

Suhle would eventually recover to second behind Hedge by the time the flag fell, with Tom Taplin coming home third. Despite several cars struggling in the worsening conditions, it was Matthew Belford who would emerge unscathed to take his maiden Morris Finance Pro-Am victory for the Porsche Centre Melbourne team, ahead of Michael Hovey and Shahin.

The third and final race of the weekend will also be the longest (45 minutes) on Sunday morning and gets underway at 10:05am AEDT. The race will be broadcast live via the 7plus app.