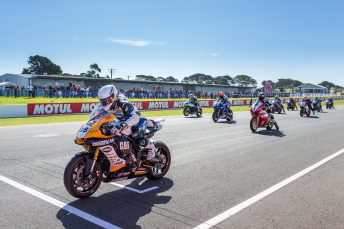 The move will see the PI Championship Superbike class run in conjunction with three major events – WSBK/ASBK Rd 1, ASBK Rd 7 and MotoGP Rd 16. Meanwhile, the Supersport class will be showcased at WSBK/ASBK Rd 1 and ASBK Rd 7 for a two-round title chase.

Remaining rounds of the PI Championship

“The PI Championship was developed as a two-round series across the World Superbike and MotoGP events and we are thrilled to now include Round 7 of the ASBK into the series.” Cameron said. “The PI Championship has seen the best riders in Australia battle it out for honours over several years, providing some of the closest and exciting racing that patrons can expect to see. We expect no less for the remaining rounds for 2017 and encourage everyone to get down to see some of the best racing Australia has to offer.”

Daniel Falzon (JD Racing Team, Yamaha YZF-R1) is the current leader for the Phillip Island Championship. The South Australian rider achieved a phenomenal clean sweep at the opening round. Robbie Bugden (BCperformance, Kawasaki ZX-10R) is currently in second, followed by reigning 2016 ASBK Champion, Troy Herfoss (Crankt Honda Protein Racing, Honda CBR1000SP). Falzon has established himself to be a Phillip Island specialist, and the rest of the field will have to up their game to challenge him. In Supersport, Mason Coote (Aark Racing, Yamaha YZF-R6) is leading the Phillip Island Championship, ahead of Ted Collins (NextGen Motorsports, Suzuki GSX-R600) and Mark Chiodo (Repsol Gas Racing, Triumph 675R).

The significant growth of the Australian road racing feeder class, the Supersport 300, which has been oversubscribed in virtually every round of the ASBK championship to date, will replace the Supersport class as the support class at the Michelin Australian Motorcycle Grand Prix 2017, but will not feature as part of the PI Championship points scoring system.

Phillip Island Championship Points (After Round One)