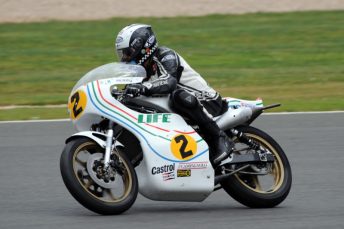 Two of Britain’s greatest bike heroes will be joining the stellar line-up of World GP Bike Legends at this summer’s Silverstone Classic (28-30 July).

Nicknamed the ‘Prince of Speed’, Read (above and below top left) was the first man in history to win 125cc, 250cc and 500cc World Championships and is a multiple TT winner.

Scottish ace Mackenzie is a multiple British Superbike champion from the late nineties and for many years was the UK’s top gun in MotoGP, notching up seven podium finishes between 1987-1993.

“We are honoured to have both Phil and Niall joining us at Silverstone,” said Gardner, a WGPBL Ambassador. “They are two of the biggest names in British bike racing and sure to be very popular additions with the tens of thousands attending the Silverstone Classic.”

Read and Mackenzie will be among ten World GP Bike Legends rolling back the years on the full Silverstone Grand Prix circuit, riding a combination of fiery four-strokes from the sport’s glory days and new Yamaha YZF-R1s painted in evocative period liveries. The names of the four remaining riders will be announced shortly.

As well as these exciting demonstrations on Saturday, be sure to visit the WGPBL stand for the chance to meet the legendary riders and see the machines up close. World GP Bike Legends will be based adjacent to the Ace Café in the National Paddock. The Legends will be available for autograph and selfie sessions with fans.

Everyone will be able to meet and greet their heroes as all tickets to the Silverstone Classic – which must be purchased in advance – include free access to racing paddocks as well as to trackside grandstands, live music concerts on Friday and Saturday evenings plus a host of other great family entertainment.

More information and all the latest WGPBL news is available on the official website: www.worldgpbikelegends.com and via our social media platforms.