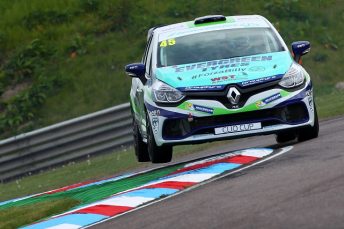 Dan Zelos continued to demonstrate his palpable pace and potential in the Renault UK Clio Cup at Thruxton last weekend, as a brace of front row qualifying performances and a new lap record around the high-speed Hampshire circuit hinted that podium finishes – if not better – are not far away.

Having already turned heads with his first car racing pole position three weeks earlier at Donington Park – and buoyed by a consistently strong showing in the pre-Thruxton test, in which he had lapped third-quickest amongst the 22 high-calibre protagonists behind the wheel of his distinctive, Evergreen Tyres-sponsored Clio – Zelos wasted no time at all in confirming his burgeoning momentum by snaring second place on the grid for both races.

Unfortunately, the location of the five-second board contributed to a tardy getaway in race one, dropping Zelos well down the field. Refusing to be beaten, he immediately set about responding and boldly regained a clutch of positions at the Complex on the opening tour. The highly-rated Dereham-based hotshot subsequently snatched fifth from Nathan Harrison and attacked Jack McCarthy for fourth on lap two, only to find himself pitched into a half-spin by his rival that required all of his impressive car control to rescue.

The delay dropped Zelos to the back of the slipstreaming pack disputing fourth place, but he bravely overtook two of his adversaries in one fell swoop around the outside of Church – the fastest and most fearsome corner in the country – and snuck past former championship runner-up Ash Hand into Allard to recover to tenth by the chequered flag. Whilst that was scant reward for a feisty and aggressive drive, the 18-year-old had certainly made observers sit up and take notice.

After a multi-car accident prompted an early red flag, race two re-started over a significantly reduced six-lap distance. A wheelspin-afflicted launch again saw Zelos concede ground, but once more, he swiftly began making amends and – in front of the live ITV4 television cameras – he had grittily fought his way back up to fifth by the end of lap one.

A new lap record – his first in Clios – then saw him reduce the deficit to his two ultra-experienced WDE Motorsport team-mates ahead to barely half-a-second, but the East Anglian teenager just ran out of time to mount a challenge for the rostrum.

Nonetheless, Zelos’ superb racecraft and indomitable spirit enabled him to maintain sixth position in the championship standings following five top ten results from the first six races – and with the Clio Cup resuming at Oulton Park later this month, he is brimful of confidence and fired-up to convert his clear promise into podium finishes.

“I love Thruxton,” enthused the Norwich University of Arts Graphic Design undergraduate and former Dereham Sixth Form College student. “It’s my favourite circuit on the calendar and such a tremendous challenge – on-the-edge the whole way round the lap, with an average speed of over 100mph and taking Church flat-out is an incredible buzz. It’s also where I won my first car race three years ago, and I returned there on a real high after going so well at Donington, which is somewhere that I’ve often seemed to struggle in the past.

“The test day had been really positive too, so I felt good going into qualifying and was able to post a series of consistently quick laps. I knew there was still a bit more time to find, so that’s what we focussed on unlocking and the team gave me a fantastic car for the races.

“In race one, I couldn’t see the five-second board as it was directly alongside my grid slot, so when the red lights came on and almost instantly went out again, I was caught off-guard. I was rapidly regaining ground when I went up the inside of McCarthy going into the first right-hander at the Complex, but he understeered into me as he took the left-hander that followed. All it takes in a front wheel-drive car is a little nudge, and I was tipped into a slide and a spin. People told me afterwards that I was sideways for half-a-second, but inside the car it felt like half-an-hour! I was out on the marbles and really thought I was going round, but somehow I managed to save it.

“After that, it was very much a case of one step forward, one step back with the slipstreaming effect at Thruxton – although I must admit that I was pretty happy with the move I pulled around the outside at Church. I could see the two drivers ahead were both defending the inside line, so I just let my car drift out wide and used the momentum to sweep past.

“The start of race two followed a similar pattern, although this time the field spread out much more so there was less scope to recover positions. Still, that meant I could get my head down and really see how fast I could go, and I managed to close the gap to my two team-mates. It was just a shame that the revised distance was so short as I was really enjoying myself out there, and whilst tenth and fifth places obviously weren’t the results we had been aiming for after starting on the front row, there were plenty of positives to take away from the weekend.

“We’ve definitely got the pace in qualifying and I’ve shown that I can race well and overtake, so the final piece of the puzzle now is the starts. Once I get the first 20 feet of the race right too, it will be a different story altogether and there’s no reason at all why we can’t go out there and push for podium finishes every time.”

Zelos credits his renewed sense of self-belief in 2017 to WDE, and it is evident that the respect is more than mutual, with Team Principal Wayne Eason quick to praise his young protégé’s eye-catching early-season form.

“We’re extremely happy with Dan’s performance so far,” he affirmed. “We were fans even before he joined WDE and knew he had a lot of potential, but he’s already proved that he has even more potential than we initially thought. His pace at both Donington and Thruxton – against drivers with a lot more experience than him – was phenomenal, and he showed us last weekend just how accomplished a racer he is too with some spectacular overtaking moves.

“He is so relaxed and clearly enjoying his racing, and I think that is a big part of his current form. He has a lot of confidence in his ability and in the car and is going from strength-to-strength each time he takes to the track. His work ethic is first-rate and he is so very nearly the complete package – getting off the start-line is the only remaining chink in his armour, but we will address that before the next round. Dan is turning into a proper little professional driver and he will win races in this championship, of that I have no doubt.”