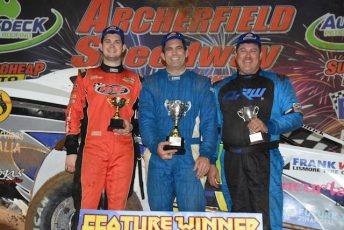 Pezzutti pounced at a late race restart to grab the lead from an ailing Lee McKinnell, who had inherited the top spot when Nick Stubbs tangled with a lapped car whilst seemingly in control of the race.

David Clark advanced from position nine to fill the runner-up spot, with Dallas Czerwinski edging out Mitchell Randall and McKinnell for the final spot on the podium.

Round two of the Polar Ice Midget Track Championship saw New Zealander Chris Gwilliam fend off the advances Rusty Whittaker to score his second feature race in as many weeks and his first in Polar Ice series competition.

Whittaker was sensational in his pursuit with his heat race performances offering little indication of what was to come. Troy Ware snared third ahead of Reid Mackay and Brendan Palmer and Brock Dean.

Both categories were down in numbers but certainly made every effort to entertain with some great racing through the heats and the features. 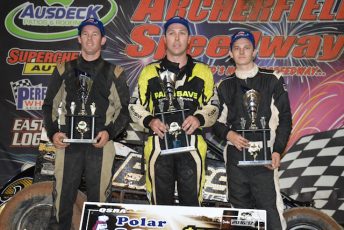 Stubbs staked his claim as a contender when he downed McKinnell and Clark in the opening Dirt Modified heat. Garry Wathen won heat two, leading Pezzutti and Trent Schofield to the flag before retiring for the remainder of the evening.

It was Schofield who triumphed in heat three over McKinnell and Stubbs, with Czerwinski joining the winners circle in the final heat ahead of Pezzutti and David Ohl.

Starting from the outside front row for the feature race, Stubbs shot to the front at the drop of the green and set about consolidating his position at the head of the queue.

McKinnell quickly found his way into second spot and that is how it seemed things would remain until, with just four laps remaining, Stubbs tangled with the lapped car of Sam Brown and both drivers made an unceremonious exit.

McKinnell assumed the lead for the restart, but a deflating right rear tyre left him in no position to defend and he was immediately pounced upon by Pezzutti through turn two, with Clark following soon after.

McKinnell fought valiantly to defend third but ultimately could not keep Czerwinski and Randall at bay, the final order not decided until the final turn. Phil McNamara, Trevor Wiley and Graeme Holland were the other finishers, with Schofield and Ohl also failing to go the distance.

The opening heat of Midget action saw Scott Doyle execute superb to start to launch clear of the field. Although the sizeable lead he had established in the early going was whittled away by races end, Doyle held on to win from Palmer and Ware.

Having rode a wheel and bounced to a halt in turn two at the first attempt to get the race underway, Ware was required to restart from the rear and scythed his way through the field to eventually finish more than four seconds clear of Dean, who had an even bigger margin over third-placed Brad Young.

Doyle duplicated his earlier performance in the final heat, once again clearing away in the opening laps before emerging a narrow victor, this time in advance of Vine and Palmer.

It took a couple of attempts to get the feature race away, shenanigans that proved costly for Doyle and Young, putting both drivers on the infield before a lap had been completed. Once underway, the event proceeded without interruption as Gwilliam grabbed the lead ahead of Ware, Whittaker and Vine, whose exit on lap 10 left three in the fight.

Once Whittaker advanced to second, Gwilliam looked under threat for the first time and a frantic chase ensued as Whittaker closed in on the Kiwi.

In the end though, Gwilliam held firm to keep Whittaker and a resurgent Ware at bay, with less than half a second separating the trio at the chequer.

Mackay, Palmer and Dean were the only others on the lead lap, followed home by Dallas Sharp, Cal Whatmore, Corey Stothard and Jason McDowell.

The Modlite feature race produced an outcome the likes of which we haven’t seen for quite some time when Australian champion Terry Leerentveld found himself unable to wrest the lead from Scott Lehfeldt. Third behind Lehfeldt and Leerentveld was Sean Butcher and Klinton Hancey, with Wayne Donaldson finishing fifth.

Thomas Hunter looked on track to win the Holden vs Ford vs Sigma Sedan feature race until a fire forced him to abandon his lead position with less than half a lap remaining. Bernie Wright inherited the win ahead of Michael Hillhouse and Brendan Robinson.

Next Saturday night (October 15) at Ausdeck Patios Archerfield Speedway will feature a huge double-header program of Sprintcars and Super Sedans along with Formula 500’s and Lightning Sprints.