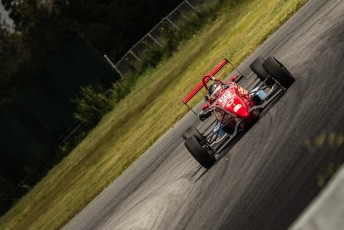 MEDIA RELEASE: Aaron Pettipas may be significantly older than the rest of the F2000 Canada field, but he was still able to hold his competitors off from flag to flag for the second day in a row to take a weekend sweep at the Bay of Quinte Grand Prix.

“It was tough at the beginning,” Pettipas said of the second race of the weekend at Shannonville Motorsport Park, which was run in very hot and muggy conditions. “I made a few mistakes. But I got better as the race went on, and so did the car.”

Pettipas discounted the idea that his age relative to his competitors might have been a disadvantage in today’s taxing weather.

“I probably look worse than I feel,” Pettipas said. “I’m a runner when I’m not a racing driver, or a Dairy Queen franchisee. I’m in all right shape. I’ve definitely worked harder than this.”

Behind him, 2nd place finisher Nathan Blok was never able to complete a pass for the lead, but he was rarely more than a second behind the leader as he continually mounted stout challenges.

“I kept Aaron honest,” Blok said. “I was starting to lose my rear tires towards the end, but the Tenaquip Work Tools Van Diemen car was very fast again. I’ve got to thank Britain West for preparing an awesome car.”

Chase Pelletier had a strong start but fell back quickly after getting involved in contact in the opening turns that necessitated a long pit stop for repairs.

“I was on the inside of another driver, and from some bad judgment on their part ended up with a collision,” Pelletier explained.

“My car ended up being damaged after that, so I just limped around for the rest of the race to gather as many points as we could. It’s a big shame because the car was running really great and this is a track that I really like to drive at. We’ll come back for the next race weekend.

The next round of the F2000 Canada Championship will form part of the weekend’s festivities for the NASCAR Camping World Truck Series Chevrolet Silverado 250 at Canadian Tire Motorsport Park on August 28th to 30th.