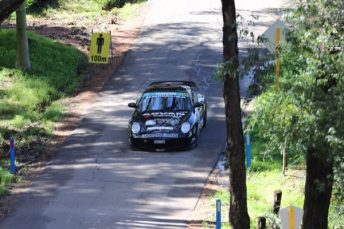 Peter Major has won four of the last seven Quit Targa West events, finished second in another and fourth in the Classic category.

Arguably, Major is one of Quit Targa West’s most successful competitors.

This year, Major said he hopes to finish on the podium’s highest step and end his rallying career on a high.

“With a five week old baby and 19-month-old at home, the wife isn’t too happy that I’m out rallying – so I’m making this one my last Targa,” Major said.

“I grew up with a lot of circuit racing but I’ve really enjoyed the difference in rallying – someone sitting next to you, someone experiencing everything with you. In circuit racing you don’t have that. But I can’t do it all, so I’m going focus on one discipline from here on.

“Let’s put it this way, I’m not going out there to come second. Everyone always wants to finish on top. Having had so much success in the past, I’m hoping we can do that this year,” the 32-year-old said.

“Ben and I have known each other for years and we’ve always said we’d do a rally together, and this being my last, we’ve made it happen,” Major said.

“We haven’t done a rally together before, but we’ve just done the recce in Malaga and that went well.

“I’m looking forward to pulling on the helmet and can’t wait to get going – four days straight of racing is going to be fun. I’m hoping the weather stays dry too – more so for the officials. Without officials we wouldn’t be able to do motorsport, so I hope they don’t have to stand out in the rain all day,” said Major, owner of Tyres and More Mobile and Totally 4×4.

After Quit Targa West, Major said he would be selling his title winning 2004 Porsche 996.

The 13th Quit Targa West revs into action from 10th to 13th August, 2017 and has attracted 57 rally teams in a mix of performance, classic and exotic vehicles, ready to race the clock on some of Perth’s most iconic roads.

It kicks off with the Ceremonial Start on Thursday 10th August from 11am to 1.30pm at Forrest Place in the CBD. Competitors will race the clock on 34 stages over 242 kilometres in Malaga, Wanneroo, Whiteman Park, Kalamunda, Toodyay, Chittering and Bullsbrook before the finale on Sunday 13th August at the City of Perth Super Stage and Shannons Classics car display at Langley Park from 12pm.

On Friday 11th August, there’s also the Northbridge Show and Shine on James Street from 6pm to 9pm.