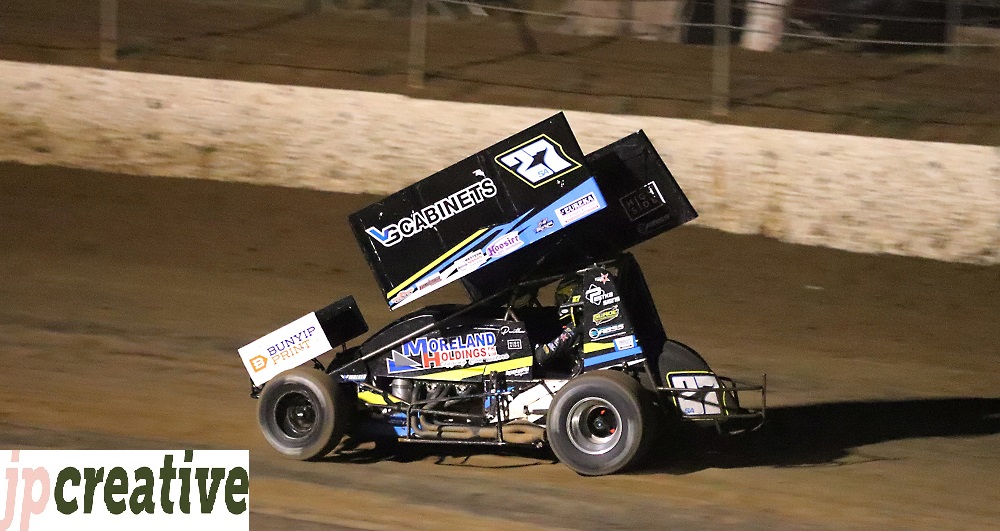 Speedway at Blue Ribbon Raceway has once again thrilled fans on Saturday night when the most powerful of Sprintcar classes the 410ci version conquered the terrific Horsham venue with the victors’ spoils heading back over the border into South Australia when Daniel Pestka picked up the win. Brock Atkins from Hamilton showed who was boss in Modified Sedans as did another Hamilton racer Ben Barker in the Production Sedans, whilst Dylan Barrow won the Junior Sedans after visiting from out of Wandin a Hume highway township.

Drivers in the Sprintcars competed in time trials, followed by two heat races each before some shoot outs and the feature event. Brett Milburn fired the first shot being the fastest on track in the time trial and pole position in his groups first heat race. The four heat races then were up next with Daniel Pestka getting the better of Milburn in that first heat leading from start to finish and motoring around faster than Milburn did in that time trial.

Grant Anderson then took victory in the second heat leading every lap and just defeating Mark Carlin by .186 of a second. Terry Rankin from the second row of the third heat took victory and in the fourth and final heat race qualifier Peter Milnes claimed the win. In the shoot out’s Grant Stansfield and Terry Rankin progressed from the Bronze into the Silver. Carlin and Stansfield then progressed from the Silver into the Gold. In the Gold Stansfield claimed pole position for the feature event ahead of Pestka, Carlin and Milburn with just .042 separating Stansfield from Pestka in fastest shootout lap time.

The thirty-lap feature event then got underway with an early move from Anderson moving forward two spots on lap one. Stansfield still led the race after ten laps with Pestka, Milburn, Anderson, and Tim Van Ginneken the top five. Pestka assumed control of the lead on lap fifteen and it took until lap twenty for before the first of the sixteen finalists dropped out of the race, Daniel Burleigh. When the chequered flag unfurled for the finish Pestka flew past the flagger almost three seconds ahead of Stansfield, Milburn, Tate Frost from Tasmania, and Anderson.

The Modified Sedans held six heat qualifying races before holding Dash races and pole shuffles to determine the feature event line-up. Home track hero Daniel Simpson won the first heat race, Brock Atkins from Hamilton the second, then Tahlia Dolic the third of round one. Australian champion Kye Walters then won the fourth heat race, Jarod Waters with the fastest one lap time in heat racing of 19.400 won the next heat race and Graham West in a LJ Torana won the final of the six qualifiers.

Next up was the dash races for the drivers that did not qualify for the pole shuffle. Michael Boyle took a win as did another Horsham member, Mark Deckert. Atkins won the pole shuffle and began the thirty-lap feature from pole with Waters, Simpson, Dolic, West, and Walters the top six starters.

From fifth West moved to third on lap one as Atkins held the lead. By lap three, Walters had moved from sixth into second before lap four changed up the lead pack again with Atkins, leading Waters, Simpson, Walters, and West. Simpson and Walters two fancied racers left the race on lap fourteen and at this point Atkins led Waters, Dolic, Matt Gerlach a Wimmera raised racer and West.

Atkins closed out the victory with a two and a half second victory from Dolic, Gerlach, West and Andrew Dike.

Fourteen starters greeted the flag in the Junior Sedan final and Dylan Barrow and Rhys Meakins started from the front of the line-up, both members of the Alexandra club. Barrow led the field and by lap six Barrow was ahead of Meakins, Jayden Bryant, James Oliver, and Bailey Rumler. The race was called on lap thirteen and Barrow took the win from Meakins, Bryant, Oliver and Rumler, whilst Jake Bradley was the first of the developing New Star entrants in the field.

Production Sedan racing seen Ben Barker win two of the three qualifiers with Horsham member Steve Honeyman winning the third. Barker started the final with Honeyman on the front row with Dehne Sparrow behind him with Ryan Queale also from Horsham. Barker shot to the front on lap one. Queale dropped back to eighth early in the race before trying to recover. Wangaratta racer Ken Mankey moved from second last on the start grid to third by lap nine. Barker held strong out front and when the race came to a close Barker had defeated Honeyman, Mankey, Sparrow and Ian Calderwood.