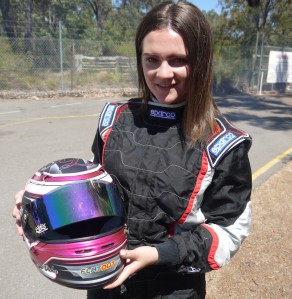 While her friends are off to the movies and hanging out at each other’s places, Perth’s Tayla Dicker will spend her school holidays at the race track.

The eloquent 16 year old from The Vines, who also helps out at her dad’s go kart shop – the same one a young Daniel Ricciardo frequented throughout his karting days – has her sights set on becoming a motorsport star.

Tayla has already been recognised for her talent having won the Junior Development Scholarship from the Women in Australian Motorsport.

She was also chosen to attend two Confederation of Australian Motorsport camps for Australia’s best karters.

But this year, Tayla will leave the kart behind and instead compete in a Formula Ford.

The teenager actually made her debut in the single-seat open-wheel car at Barbagallo Raceway last November, but it was a race she’d rather forget.

“I think it just came down to my inexperience,” she said. “The driver in front of me out-braked himself and went out wide. I think I probably slightly out-braked myself too.

“On the exit of the corner, he came back onto the racing line a lot faster than I anticipated and I rode over his rear wheel.”

Despite the spectacular incident, Tayla can’t wait to get back into competition.

“I’m really excited. I’m in a different car this year and have done many more laps and I am feeling confident in the car.”

“We had a race meeting down at Collie last month and I was racing against all different types of open-wheel cars which helped me to really gain some confidence with overtaking.”

Tayla, who will be the only girl in the field when the first event on Sunday, April 12, is high on ambition and said: “I’m aiming to finish within the top three for the championship this year.”

“I’m just always trying to improve my driving and lap time and also learn about some of the technical side of the car.”